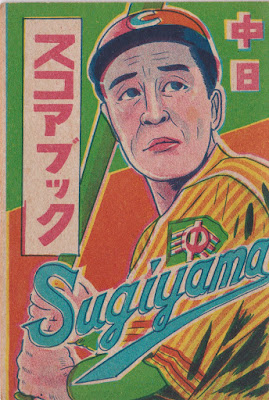 This is a neat little thing I picked up a while ago, a Chunichi Dragons Scorebook with Satoru Sugiyama on the cover.

Sugiyama could be described as a "Hall of Very Gooder".  In a career lasting from 1948 to 1960 he was a 3 time all star, led the league in home runs in 1952 and had a few solid seasons in the 1950s where he was in the top ten in a number of offensive categories.  He spent most of his career with the Dragons here in Nagoya and was born and died here in Aichi prefecture - the prototypical home town player.

I love this scorebook - the colorful artwork on the cover is just amazing.  It looks like the same sort of art you see used on menko from the early 50s and I wondered if this might have been "borrowed" from one, but so far haven't found one that used this (though I haven't looked too hard).

Its not too big, its like a pocket sized booklet with dimensions a bit smaller than a postcard.  It has seven pages in it, each with a very simple scorecard printed on it.  The back looks like this: 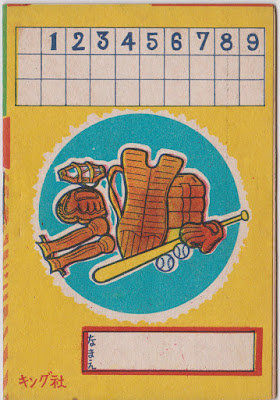 It was published by the "King Company" according to the text on the bottom left.  Otherwise I guess its self explanatory.

Sugiyama's career with Chunichi lasted from 1948 to 1958, with his best years coming in the first half of his tenure so this was likely published in the early 50s.
Posted by Sean at 7:36 PM