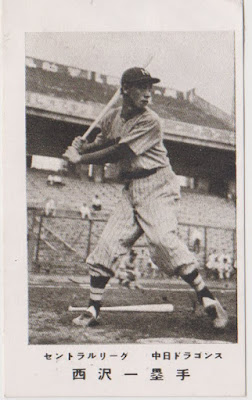 I picked up the above card a few months ago as part of a lot of post-war bromides.  They used to sit in the showcase of Caps, one of Nagoya's big four baseball card stores, but it closed down earlier this year and I got the chance to pick over some stuff like this while they liquidated their remaining stock on Yahoo Auctions (I also picked up my Pepsi Menko during the same sale, sadly even their account on Yahoo Auctions is now inactive so the business is truly gone).

This card, which is from the set Engel catalogues as the JBR 9 1950 Marutoku Narrow B&W, was one of the main ones in the lot I was interested in.  It came in a topholder which still had a 2000 Yen price tag on it, though I paid about 5000 Yen or so for the whole lot, which had a few other good post-war bromides in it so the pro-rata cost of this card was probably just a few hundred yen to me.

It depicts Michio Nishizawa, who is one of the more interesting players in Japanese history.  He broke into professional ball early - at 16 years and 4 months when he made his debut he set the record (which still stands) for the youngest player in Japanese history.  He played right here in Nagoya from 1937 to 1958 and, like Shohei Ohtani (and, of course, Babe Ruth), was one of the exceptionally rare players who was a star both as a pitcher and as a batter.  As a pitcher his best season was 1940, when he posted a 20-9 record and a 1.92 ERA.  In one game in 1942 he performed the remarkable feat of pitching a 28 inning complete game (which ended in a tie!)

In 1943 he was called up for military service and missed the rest of the war years.  When he came back in the 1946 season, a shoulder injury put an end to his career as a pitcher, as he put up a lackluster 5-8 record with a 4.52 ERA.  The next season he came back as a first baseman and never pitched another game except for a single appearance in 1947.  He developed into one of the Central League's top hitters, his best campaign coming in 1950 when he clobbered 46 home runs, knocked in 135 RBI and batted .311.

Since his career was split effectively into two he didn't reach any of the big statistical milestones later associated with the Meikyukai (2,000 hits, 200 wins as a pitcher), but he was elected to the Hall of Fame in 1977.  Sadly he died of heart failure later the same year at the relatively young age of 56.

I really love the photo of him on this card.  Unlike the US, in the 1950s the concept of a "baseball card" hadn't fully appeared yet in Japan and instead you had either bromides like this one, game cards of various sorts (like Karuta) or Menko to choose from.  Menko are a lot flashier and more colorful, which attracts me to them, but they also have the disadvantage of mostly featuring hand drawn caricatures of players rather than photos (at least with the ones issued in the early 50s or earlier).  So collecting both kind of makes sense: menko for the colorful artwork, and bromides for the real photos.