The Oddest Key card in a set: Doug Decinces Edition 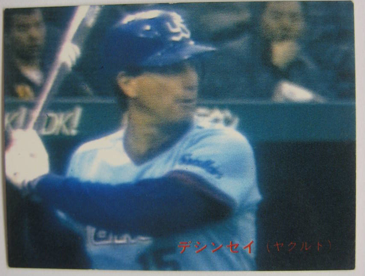 Ever wonder what the weirdest card to be considered the "key" card to a regular set is?

For most regular sets in the US, at least until the 90s, it was either a big rookie, or a Mickey Mantle or some other star.

In Japan, with Calbee sets, its almost never a big rookie or even a star.  As I mentioned in a previous post, sometimes its just a boring card of a stadium.  Rarity of certain cards always trumps star or rookie power in determining the key card in older Japanese sets.

The 1988 Calbee set is an example of a set with an odd key card.  I'm about 70% of the way to completing that set, but the remaining 30% are all short prints which are really expensive and hard to find.

Probably the hardest and most expensive to find is this one: Doug Decinces (card #110).  Its from one of the hardest to find short printed series in the set AND its one of the only cards of Decinces' brief time in Japan with the Yakult Swallows (he also appears on card #74 in the set, but that was not short printed and is much easier to come across).  Combined these make it expensive, a copy of it (from which I cribbed the above photo) is currently being auctioned on Yahoo Auctions with the bidding now at 5250 Yen and counting.  And they don't show up for sale that often. There are a couple of other cards from the same series which probably sell for about the same (notably Choji Murata) but I think at the very least this DeCinces card is tied for first spot in this set.

The card is also notable for almost certainly being one of the infamous 1988 Calbees with a picture that was taken by a guy literally just pointing a camera at the TV during the broadcast of a game.  Legend has it that for some reason that year Calbee didn't have photos of a lot of players and, instead of just sending a photographer to the stadium, they took a shortcut by just taking pictures of a TV during games.  There are some legendarily bad photos that came out of that experiment (Bill Gullickson's is a favorite of mine), you can always spot them by how grainy the picture looks and Decinces' card is no exception.  There are a few cards in the 1987 set that look suspiciously like they may also have photos taken by the same method, but otherwise this wasn't a normal way for Calbee to get pictures (thank god).

Decinces is an interesting and kind of overlooked member of that class of really good (but not HOF caliber) MLB player who came over to Japan in the twilight of their careers.  He only played part of the 1988 season, missing the last half due to a back injury which led to his retirement.  He did however parlay his experience with the Swallows into getting hired as a consultant on every Japanese baseball fan's favorite movie: Mr. Baseball.

At the moment he is  waiting to see if he will be spending most of the rest of his life behind bars.  He was convicted a little while ago on multiple charges related to insider trading that had been brought by the SEC and is currently awaiting sentencing.  I'm hoping he doesn't spend too much time behind bars partly because insider trading is mostly a victimless crime which doesn't really warrant the lengthy prison sentences that can accompany it under American law and partly because its just too much of a bummer to think that is how the Doug DeCinces story is going to end.
Posted by Sean at 8:43 PM