Collecting in a World Where Nobody Cares About Condition


One of the things that drives me nuts about the American card market is the insane obsession with condition that has gripped it in recent years.  I've become a bit of a regular on Net54 and it seems about half the posts there are people expressing an opinion related to card condition.  Some hate the obsession with it.  Some are wondering if they should try re-slabbing a card to see if they can get a higher grade.  Some are mad that a card they bought was listed as Ex but is more like Vg-Ex.  Some find the distinction between a PSA 8 and a PSA 9 to be completely arbitrary.  Some can't believe that some people can't see the difference between a PSA 8 and a PSA 9.

And don't get them started about them PSA 10s.

Never in human history has so much (digital) ink been spilled discussing an issue of less import to the world in which we live.

Its not that I don't share a concern about card condition: like any collector I like my cards to look nice.  But at the same time I can't really bring myself to care about it that much.  Are microscopic differences in card centering really worth so much of the collecting world's attention?

In the Japanese hobby, refreshingly, these conversations never happen.  Nobody seems to care much about condition.  I'd like to devote this post to exploring this aspect of the Japanese baseball card hobby in a bit more detail.  I'll do this by first demonstrating this fact empirically by looking at the complete absence of grading services like PSA in the Japanese collecting world.  Then I'd like to further that discussion by looking at the complete absence of any comparable sort of grading standard (outside of grading services) in the hobby in general - the terms "vg", "Ex" or "Mt" are unknown here and have no Japanese equivalent.  Finally I'd like to devote a bit of time to considering both the positive and negative consequences of this difference in the Japanese hobby world: put simply, its not as awesome as you would think.

1. Grading card services are non-existent in the Japanese hobby

To demonstrate how much Japanese collectors don't care about grading services like PSA, I'll do a little experiment on Yahoo Auctions (Japan's Ebay) right now as I type this post.  The baseball card category currently has 180,119 listings.  That is a pretty sizeable amount, and includes everything from commons to cards with BIN prices in the 10s of thousands of dollars.

How many of those cards are graded?  Running a search for "PSA" in that category gives us a whopping: 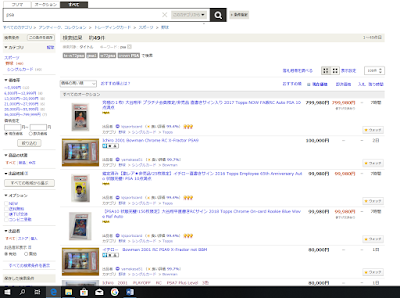 So 0.002% of cards available on the biggest Japanese market for cards have been graded by PSA (a search for PSA's rival SCG gets zero hits).

But even this is an exaggeration in terms of measuring how many Japanese cards are graded.  Out of those 49 cards, 26 of them are actually American (mostly Topps, Bowman, Donruss or UD)!

Yes. But if we are going to narrow this down to how many of these are targeted to Japanese collectors even this is an exaggeration of the relevance of PSA.  Of those 23, 16 of them are cards of Ichiro (mostly his Calbee and Tommy ID rookie cards) which, judging from the listings, are being targeted towards American collectors of Ichiro (given away by the fact that they use English in their listings, which is extremely rare on Yahoo Auctions).

So that leaves us with 7 graded cards for the Japanese collector?

No, 5 of those cards are of Shohei Ohtani or Hideo Nomo, also targeted towards Americans for obvious reasons.

Yes, there is a 1967 Kabaya Leaf card of Yoshinobu Yoda and a 1992 BBM card autographed by Sadaharu Oh which could be of interest to Japanese collectors.


2. OK, no grading services, but people can still care about condition, right?

Of course, before grading services entered the US market collectors already had a fairly well developed system of grading cards (which PSA just copied) from poor to mint and assigning differential prices based on grades.  Doesn't the Japanese hobby do something like that?

This can also  be seen in the way cards are listed on Yahoo Auctions.  Basically everything (except those 49) are "raw" cards, which American sellers on Ebay will almost always tell buyers what condition it is in - VG, EX, Nmt, etc (often with a caveat about them not being pro graders, etc).

These terms basically do not exist in the Japanese hobby, nor is there any Japanese equivalent.

Individual card listings on Yahoo Auctions almost never mention condition at all.  The Japanese hobby doesn't have a universally accepted grading system like in the US.

This isn't to say that condition is 100% absent from listings.  Some sellers use a 3 tier grading system which is as complex as it gets here:

A "beautiful item" could probably fall anywhere Ex and up, an "average Item" would be more like mid-grade, and a "junk item" would probably be in the p/f/g range.  But these categories are extremely subjective and not widely recognized as having a specific meaning, only a few sellers use them.

For the majority, at least with vintage cards, the only mention made of condition is a boilerplate disclaimer that you see everywhere which roughly translates as:

"These cards are old, they may have wear and tear on them.  Buyers expecting the item to be like new please refrain from bidding."

This applies even to high end items.  Here is a 1987 Calbee complete set for sale right now:

But look at that listing. You've got 3 grainy pictures in which you can't tell anything about the condition.  And the description of the condition, in its entirety is this:

"Please confirm (the condition) by looking at the pictures.  There are many in nice condition, but two have been written on with magic marker. There are also cards with creases."

This description is so vague for all the buyer knows they could be getting a set that is 90% Nrmt with a few lower grade, or one that is almost entirely mid grade with some in poor condition, or even one that is mostly lower grade with a few that are extremely low grade.

This isn't, I hasten to add, a bad seller - ALL listings on Yahoo Auctions look like this.  Japanese buyers collect cards for the cards and not for the condition. This isn't to say that condition is irrelevant to the hobby,  nobody likes cards that are creased and a new one looks nice, but the insane nit-picking of minor stuff differences in grade that dominates the US hobby is completely non existent in Japan.

You'd think so, right?  As I said at the start, I absolutely hate the obsession with condition that dominates the American hobby that I grew up with, so shouldn't I be thrilled that I collect cards in a market where nobody cares about that?

The answer to that is that kind of sort of I am a bit.  And the reasons for that are I guess self evident - one of my pet peeves is not here so I am not annoyed by it.  Which is cool....but not as cool as you'd think, hence the equivocation in my answer.  There is a real disadvantage to this lack of insanity which I have also discovered.

That disadvantage lies in one of the beneficial side effects of the American hobby's obsession with condition.  It has created an affordable niche market for the "mid grade" collector.  Since all the big money in the hobby goes to  high end stuff, there are plenty of bargains around for guys like me who don't care about condition and just want to put sets together.  A card that sells for $1,000 in PSA 9 can probably be had for 10-20$ in an attractive mid grade, which means that putting sets from the 60s and 70s (or even earlier) remains an affordable option.

That steep "mid grade discount" doesn't exist in Japan.  If a card is expensive, then its expensive no matter what condition it is in (unless it is absolutely destroyed).  You can't find bargains on the sought after stuff just based on the fact that it is lower grade like you can with American cards.  For example, I've been trying to find a cheap copy of card #1 from the 1973 Calbee set featuring Shigeo Nagashima for the longest time.  Every copy that goes up on Yahoo Auctions however always gets bid up into the hundreds of dollars.  Even if its got a crease in it, or well rounded corners, people here are bidding on the card rather than the condition (again, except for true beaters) and will pay the same money for a copy that would probably grade around vg as they would for one that would grade exmt.

So the grass is sort of greener on this side of the fence in some respects, but there are a few brown patches as well!