Which is the Most Valuable Card from the Monster? 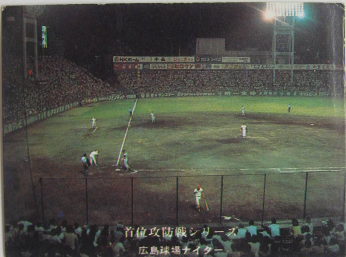 I just picked this up and am quite excited about it because the card has a very dubious claim to being the most valuable from the set, and thus the key card to my years long quest to finish this 1472 card monster.

Why is the card's claim dubious?  Lets review the merits of the case.

Basically the claim lies with its value in my copy of SCM from 2010 (admittedly out of date but its the most recent I have).  It lists this card, which was from one of the two rare Hiroshima regionally issued series in the set, at 15,000 Yen. That puts it in a tie with the Senichi Hoshino cards from the Nagoya regionally issued series, also rare.  So perhaps its better to describe its claim as being tied for first place rather than solely occupying the position.

But the tie isn't what makes its claim dubious.  Engel lists it at $150, about the same as SCM, but it lists several other cards at $200 which is obviously higher.  The cards Engel lists are mostly those of foreign players (like Richie Schienblum's card #155 from the same series) or big stars (like Sachio Kinugasa's card in the same series).  So according to Engel, this is one of the higher priced cards, but not #1 in the set.

But even that isn't what makes the claim dubious.  I like the Engel guide and admire the work that went into it, but the prices for Calbee cards from the 1970s listed in it are completely out of whack with what the market for these cards is.  No way is the Schienblum card worth more than this one, at auction this one will easily fetch 2-3 times more than Scheinblum (or even Kinugasa), which is considered a common in the series (worth a lot by virtue of being in the rare series, but not the key card in the series).  So I prefer SCM to Engel on that point.

But....in reality neither of these is right.  The real most valuable card is, ironically, a different card featuring Hiroshima Municipal Stadium that has a photo almost identical to this one.  It is card #630 in the set, from the other rare Hiroshima regional issue (the "Red Helmet" series).

Having followed Yahoo Auctions sale prices on the big cards in this set for a few years now, the big trend I've noticed is that the Red Helmet series that card #630 is in  is considered by far the most valuable of the entire set (which is comprised of 40 series).  Cards from it almost never sell for less than 3,000-5,000 Yen each, compared to cards in the other Hiroshima regional series which #157 is in, which usually sell in 1,000-2,000 range.  This is the reverse of SCM and Engel, which price the Red Helmet series much lower.

I'm not sure why the market is working like this, just looking at availability there usually are about the same number of cards from both Hiroshima series available (which is to say not many of either, I don't think one is noticeably rarer than the other), but the Red Helmet ones are definitely hotter and sell for higher prices. This is reflected in my own collection, I've been having more difficulty and am paying more money for the cards in the Red Helmet series than for any other.

But anyway, back to the card I actually do have.  While #157 isn't the key card to the set, it is the key card to what is probably the second hardest to complete series in the set, which means it still has a place in the pantheon of major cards in the set. 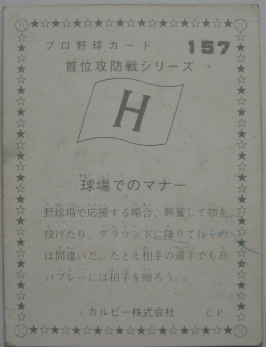 Its a bit of an odd one, it is dedicated not to the game depicted on it but rather to the general topic of stadium manners.  The back says:

When Rooting for you team, throwing objects or jumping down onto the field of play is not right.  Even when a player from an opposing team makes a fine play we should all clap.

I'm not sure that Japanese fans need to be admonished like this given that their stadium etiquette is legendary around the world, but there you have it.  Come to think of it, perhaps their etiquette is so legendary because they get reminded to be polite so often that they even dedicate baseball cards to it.  So maybe all those nicely-tidied-up-after-the-game-in-which-a-Japanese-team-played World Cup and Olympic Stadiums over the years have this card to thank for that.

I got a pretty decent bargain on this, I only paid about $20 with shipping for it.  The cheap price is explained by the back, which has a little pen mark if you look closely.  Otherwise it probably would have sold for quite a bit more.

This also demonstrates why the 1975-76-77 set is do-able despite its size.  You will never find the key cards from the other Calbee sets from the 1970s for $20 no matter how hard you look.  The key cards from those sets will run you into the hundreds or thousands of dollars even in lower grade condition.  But the 75-76-77 set are still kind of obtainable!
Posted by Sean at 8:43 PM