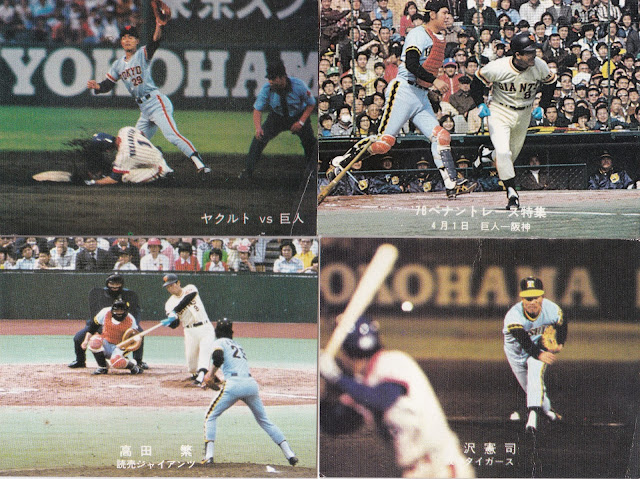 The reaction of the baseball card market to the Covid 19 recession is weird.

A few months ago I thought for sure the card market would collapse along with employment levels and everything else in the US.  But I seem to have been proven wrong so far on that count.  Unemployment is sky high, companies are going bankrupt left right and center and the virus is spreading more or less out of control now in that country.  Yet anecdotally at least all I am hearing these days are stories about card prices going up rather than down.  Which is weird.

This is also happening here in Japan, albeit at a much smaller scale.  Back in March I thought that card prices would  go down and I could pick up some bargains.  That never materialized and the competition I face on Yahoo Auctions for cards if anything seems a bit more intense now than it was before the pandemic hit.  Public health and the economy here haven't been hit anywhere near as badly as in the US, but at the same time the country like everywhere is in a recession.

What did I miss?

There is of course a parallel debate going on about another disconnect with the real economy, which is the stock market.  Actually, that isn't really a debate, more just an observation that stock prices do not move in lockstep with broader economic indicators - when GDP goes up or down stock prices don't necessarily follow.  This is because the value of stocks are generally determined by how investors evaluate the future cash flows they expect from a company weighed against risks associated with it.  Since both of these are future variables, how the economy is doing today is not itself a major consideration.

Cards are different from stocks though and the disconnect between their value and the overall shape of the economy can't be explained in the same way.  They don't produce cash flows and risks associated with them (like the risk that a card you spent 100$ on is going to be worth only 10$ in five years) are impossible to quantify.

So what factors are driving collectors through their buys and sells to value a card today at $1,000 when they valued it at half that a year ago?  Despite all the chaos happening.  And why was I so wrong in my prediction?

My guess would be the following.

Its self evident that the value of expensive cards is only determined by the people who have enough money to throw some of it away on a hobby centered on the mere ownership of stuff.  So understanding changes in card values really just requires you to understand how those wealthy collectors are doing.

Wealthier collectors, like wealthier people in general, haven't been hit as hard by this as people in the middle or lower income tiers.  Few of them have lost their jobs and even for those that have they are way more likely to have income from investments and other sources of income to tide them over.  They are called "wealthy" for a reason after all.  So even with 10s of millions left unemployed and at risk of eviction and so forth, the people with money still have money.

2) The spending habits of wealthy collectors have changed

Despite being way more financially secure than most, the recession hasn't left the wealthy entirely untouched and they are cutting back spending on a lot of stuff.  This is having a disastrous impact on people who provide services to them for a living.  They aren't getting manicures, aren't going on European vacations, aren't getting their yachts cleaned, aren't going out for expensive dinners at fancy restaurants.  A lot of these are things the Coronavirus itself, rather than economic limitations, have taken off their spending menu.

Cutting back on those things probably leaves a lot of wealthy collectors with more discretionary cash on hand than they would normally have.  So why not spend it on cards?  No risk involved, its a hobby they can pursue completely at home!  Which is where most of them are these days anyway.

Basically cards are part of a broader category of discretionary purchases which are completely safe from the virus and therefore it makes sense that more would be spent on them now than before among the people who are insulated from worries about job losses, etc.  Money they would normally be spending at the golf course is now finding its way into the card market instead.

3) Cards are seen as a safe haven asset

I mentioned earlier that the stock market hasn't moved in tandem with the broader economy, which is true, but its also true that there has been a ton of volatility in the markets and there is a huge amount of unquantified risk hanging over all of it.  Investors don't know how long this pandemic related chaos is going to last, what systemic risks in the economy it is going to lay bare, and who the winners and losers are going to be 5 years, or even 6 months, from now.  Basically, stocks are a huge risk and other types of investment with a fixed return (bonds) aren't paying out much.

So they've got a lot of "dumb" money sitting around and aren't sure where to put it, they see cards going up in value and think "why not?" and throw more of their money into that simply because it seems the best out of a list of bad options that they have.  It becomes a bit of a self reinforcing cycle as more money enters the market the signal it sends becomes stronger and more money follows.  This becomes easier to justify for people who have cut back on other hobbies, since money spent on baseball cards is money they expect to get back at some point in the future, unlike money spent on the golf course or getting a manicure which is gone the second you spend it.

Where it Goes from Here?

The problem with all of these factors,  particularly the latter two, is that they are temporary situations which are only going to last as long as the pandemic is with us.  When a vaccine or treatment comes along, the motivation to return to old spending habits is going to be pretty high.  And the attractiveness of cards as a place to park your money is going to diminish.  Ironically while the recession has been good for cards, the recovery might be really bad for them. We might just be seeing a bubble in the market that will burst as quickly as it has inflated.

Or not, I have to admit my confidence in making predictions about this stuff has been shattered by how wrong I was in March.  I do think its an interesting thing to speculate about though, hence this post.