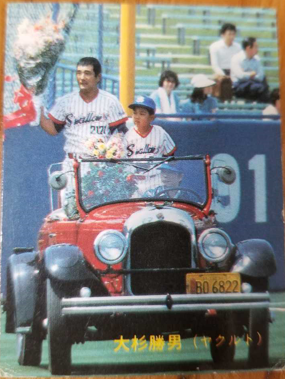 I was browsing through Yahoo Auctions for Calbee cards from the 1980s the other day when I came across the above card (which I don't own).  Its from the 1983 Calbee set and features Hall of Famer Katsuo Osugi.  As the back of the card notes, he accumulated over a thousand hits in both the Pacific and Central Leagues over his career.

The thing that caught my eye of course was the photo on the card.  You don't see cards with players being driven around on Archie Andrew's Jalopy very often.  The back of the card doesn't tell us what the occasion was, though he did retire in 1983 so this may have had something to do with that. 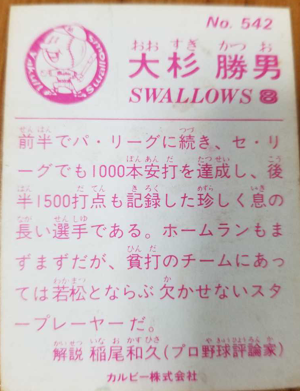 This card is #542 in the set, which is in one of the very rare short printed series.  How rare, you may ask.  I looked the card up in my old copy of Sports Card Magazine and was shocked to see that there was a blank space in their checklist next to card 542.  The compilers of it didn't know who was on that card. 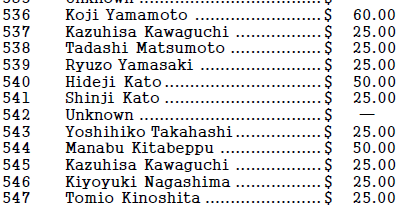 I was really interested in this card at first just for that photo but now I'm really intrigued that this is the first time anyone has seen what card 542 looks like and who is on it!

The price (5000 Yen starting bid) is a bit out of my range, and also the seller has zero feedback which is a bit fishy so I'll probably pass but I just wanted to do a post about it because I thought it was so neat: another little blank spot in the collecting world's checklists has been filled in!
Posted by Sean at 6:46 PM