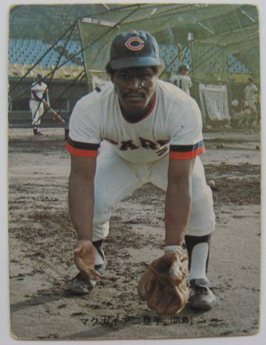 The above is a 1973 Calbee card of Carp second baseman Mickey McGuire.  McGuire had a short career with the Baltimore Orioles in the 60s, recording only 4 major league hits (4 more than me of course), and later played a couple of decent seasons in Japan with the Hiroshima Carp in 1973 and 1974 where he hit .265. 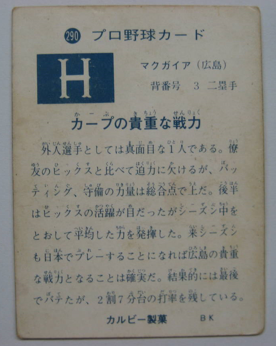 The card is low grade, with pretty heavy wear on the corners and some discoloration on the back.  Probably it would grade about "Good" or so at best. 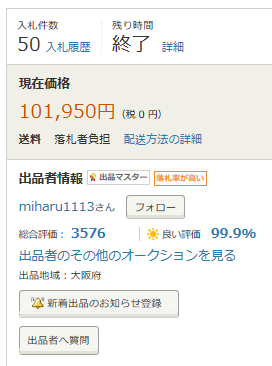 This is why I am not actively collecting the 1973 Calbee set, the prices are out of this world.  The McGuire card is part of a short printed series running from #261 to 297 where every card is hyper valuable like this.

And that ain't all, there is another equally rare series (210 to 237) and numerous other high demand cards that will sell for thousands of dollars even in lower grade.  The set is just littered with them.

I think the 1973 Calbee set is emerging as the most valuable one in Japan.  You could be looking at shelling out  $100,000 US if you were to try to put the set together in decent grade. And even then it would take you many years to do so since cards like this one don't show up for auction very often.

The only other set I can think of which might approach it is the 1967 Kabaya Leaf, but I don't think it comes close.  That set has four hyper rare cards that will set you back several thousand dollars each, and five other short printed cards that will probably run you close to a thousand.  But that is just 9 expensive cards, the 1973 Calbee has close to 100 that will cost you in the $500 plus range and quite a few that would be in the thousand dollar plus range.  The non short printed 67 Kabaya Leaf generally sell for more than the non short printed 1973 Calbee, but again there are way fewer of them (119 cards in the 67 Kabaya Leaf set verses 368 cards in the 1973 Calbee set).

This is also one of those sets where you can basically ignore what the Engel guide says in terms of price (though it is still quite useful as a checklist and for figuring out which ones are more expensive relative to others in the set).  Prices really seem to have taken off over the past couple of years and the prices in the guide are completely out of date.  The McGuire is listed at $400 for a near mint copy and yet here we have a very low grade copy selling for $1000.  This is by no means the only example, across the board the harder to find 1973 Calbees are exploding in price.

Its kind of crazy, but 1973 Calbee isn't just one of the most expensive sets in Japan, but in the world.  For comparable American sets you'd have to go back to the rare early 20th century Tobacco ones.  Post war, the 1952 Topps set makes for an awkward comparison.  On the one hand it has the Mickey Mantle card which has gone into the stratosphere in terms of price. No card from the 1973 Calbee set comes close to selling for the same as that Mantle. On the other hand, except for the Mantle the other cards in that set are way cheaper and easier to find than the harder to find 1973 Calbees, so its a bit of a toss up.

I'm holding out hope that this price explosion won't affect Calbee sets from subsequent years, particularly the 1975-76-77 set I'm working on, at least until after I've finished it (which is going to take a while).  For the moment at least none of the cards in that one sell for anywhere near this much.
Posted by Sean at 8:07 PM