My other Sadaharu Oh Rookie Card 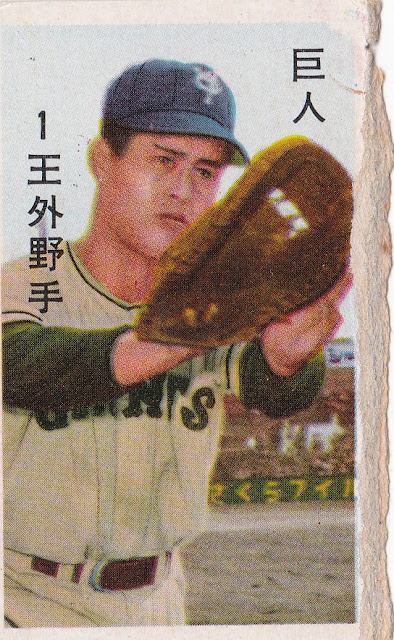 I picked up my second Sadaharu Oh rookie card recently.  It was hidden in a lot of other beat up menko so I got it for a very cheap price.  I like that it is still possible in Japan to do that.  Like in the US its probably been 50 years since the last time someone bought a cheap random lot of 1950s cards with a Hank Aaron rookie casually tucked away in it.  But in Japan, you can still find the Japanese equivalent.

My card has an obvious condition issue with that teeny bit of wear on the right edge.  It looks like for some reason the kid just tore the card off the sheet on that side instead of using scissors.  Damn 50s kids.  Still though, this was a nice find. 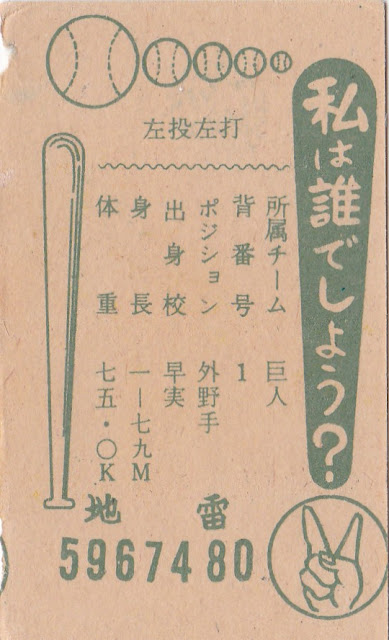 Its from the 1959 Marusho JCM 39 set.  According to Engel there are two versions of his card from that set, this one with him fielding and another with him at bat.  This one shows him in the traditional blue cap, green sleeves and uniform lettering of the 1950s Giants (joke).
Posted by Sean at 6:54 PM