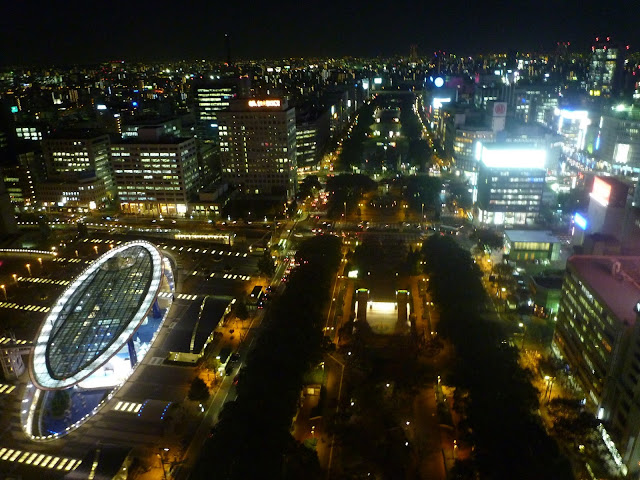 Tokai is centred on the city of Nagoya, home of the Chunichi Dragons.  With about 10 million people living in Nagoya and its suburbs its Japan's third largest urban area.

The city has kind of a bad wrap as an ugly, grey industrial blight on the landscape.  Actually its a fairly well earned wrap.  This for example is the type of scenery that accompanies your typical Nagoya wedding hall. 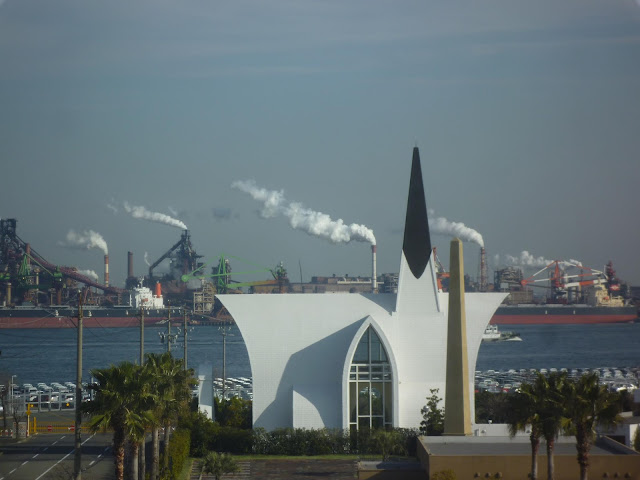 Its not all bad though.  The Osu area has some cool side streets with lots of neat shops that are fun to stroll through 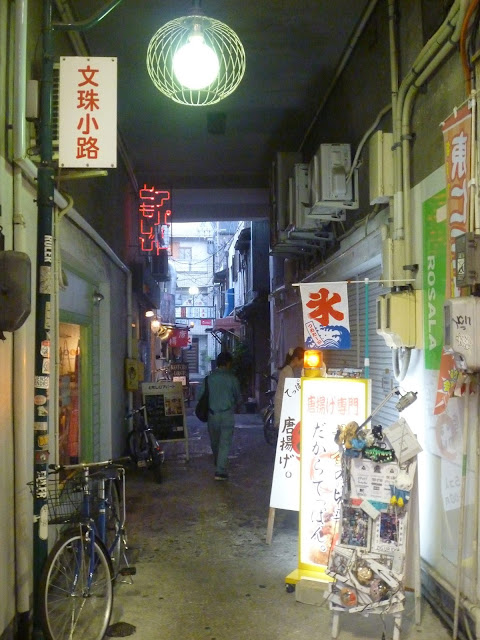 The TV Tower is kind of a neat landmark too: 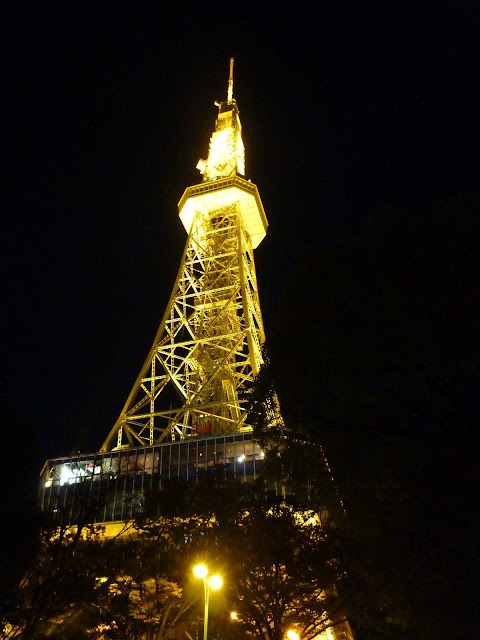 It was actually destroyed by Godzilla in 1964, a fact which very few landmarks can boast of: 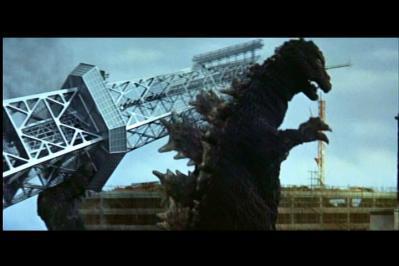 Its also got a castle and the tallest train station in the world.  Its hard to believe but this city actually has a long history which has unfortunately mostly been bulldozed out of existence.  But the same can be said of pretty much any Japanese city so I wouldn't hold it against Nagoya too much. 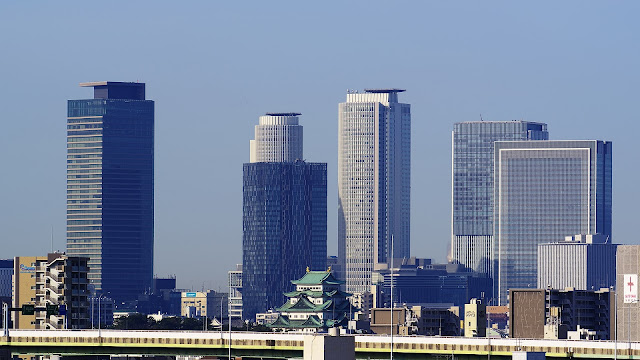 It is also the location where most of Mr. Baseball was filmed.  So Tom Selleck spent a bit of time here shortly after Magnum P.I. ended, which is sort of neat if you think about it. 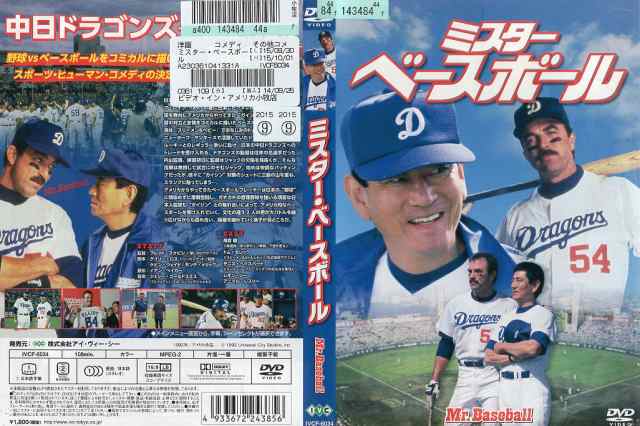 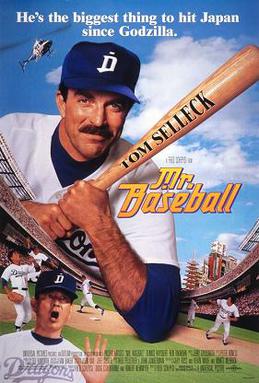 As far as I can tell, Calbee released six series between 1973 and 1984 exclusively in the Tokai region.  Some of these are extremely hard to find. 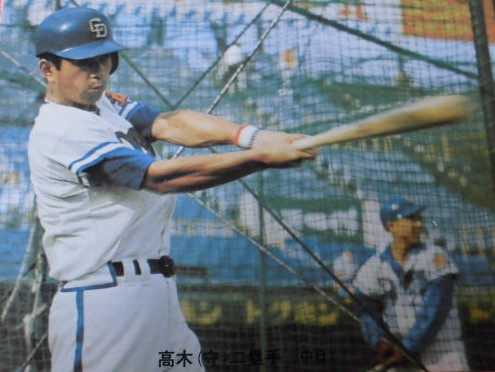 Cards #210 to 236 of the 1973 Calbee set were only released in the Tokai area.  They feature Dragons players including Hall of Famers Morimichi Takagi and Senichi Hoshino.  It also features a manager card of Wally Yonomine, which I think is the only Calbee cards of his ever produced.

This is one of the hardest series from one of the hardest sets out there to collect.  There are probably only a few dozen copies of each card still in existence and since this is probably the most popular set among vintage Calbee collectors, prices are quite high - even the common cards are worth over $100 each.  There is a copy of the Yonamine card for 56,500 Yen (about $500 US) on Yahoo auctions right now.

The high prices have kept me from going after the cards from this series, but they are pretty cool.

The 1974-75 Calbee set is one I don't write about too much since I'm not actively pursuing it, but I do have a small collection of them on the go which I add to from time to time.  Its a 935 card set so quite big, and two of the series in it were only issued in the Tokai area.

The first (which came out in 1974) runs from card #73 to 90, featuring Dragons players including Tagaki, Hoshino and Yazawa.  These are pretty rare too.  There are only two cards from this series available on Yahoo Auctions right now, which is even fewer than for the 1973 series.  But prices are way cheaper, singles seem to go for between $10 and $20 each or so.  I'm guessing the lower price is probably attributable to fewer collectors trying to piece this set together.

The second (which came out in 1975) runs from card #792 to 827 and basically has the same player selection.  These seem to be a bit less rare than the lower numbered series since there are more than a dozen singles from it available right now.  The price range is about the same, $10 to $20 each or so.

This is one of the things that makes the 1974-75 Calbee set a bit more do-able than the 1973 one, the regional issues haven't been priced into the stratosphere.

I have a couple of the higher number Tokai series in my collection, but I'm not actively adding them to my collection right now. 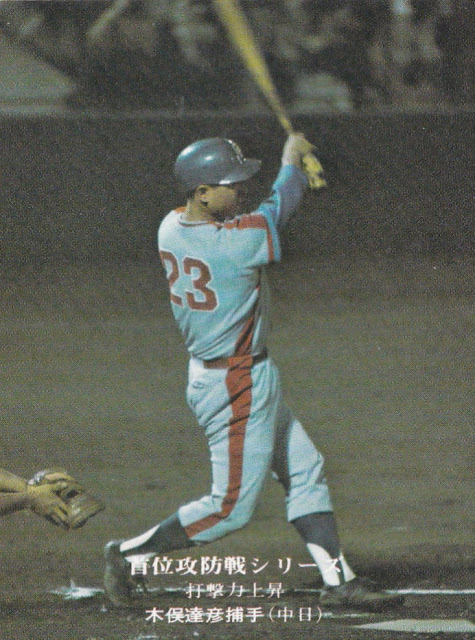 The "monster" set has one series from #37 to 72 which was released only in the Tokai region.  This is the only Tokai regional series that I have actually tried to collect since I'm working on the set, and I've written about it here before (here and here). At the moment I am just 14 cards short of finishing it up, and I have 2 of the 3 cards of Senischi Hoshino, which are the most valuable.

The cards from this series are about the same as the ones from 1974-75 in terms of rarity and price.  Actually the price may have gone up a bit as a direct result of me buying them.  When I started I was able to buy them in the $10 each range, but these days its hard to find them for under $20 and I think that is because of me.  When there are only a handful of cards available, one guy buying them up can have an outsized impact on the price.  Maybe when I'm finished the prices will go back down again!

In 1977 Calbee released a stand alone set (as opposed to a series within a larger set). This seems to have been released only in Nagoya city itself as opposed to the Tokai region as a whole as each card has the "Na" from "Nagoya" on it.  It is a 36 card set (Engel lists it as JC 5d) and unlike other Tokai area releases it features players from other teams as well as the Dragons.

This set is very rare and very expensive.  Prices on commons start at about $50 and there is a Willie Davis card which is going to set you back a lot (one is available on Yahoo Auctions right now for 30,000 Yen, about $300 US).

I don't have any of these cards and don't think I'll ever make a pass at that set! 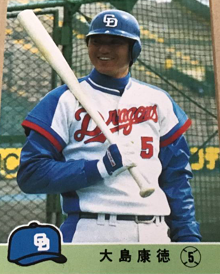 After 1977 Calbee took a bit of a breather and didn't release another Tokai series until 1984.  That year cards numbered 641 to 690 in its main set were only released in the Tokai area and all feature Dragons players.

These cards are also pretty rare and expensive, there are a few available on Yahoo Auctions right now and the cheapest starting bid of any of them is 4,000 Yen (about $40).

The existence of this series and a significant number of other very expensive short printed series were a major factor in me putting aside my 1984 Calbee project.  I like the set with its distinctive look and I have about 200 cards from it, but there are about 200 or so short printed ones (of which the Tokai regionals represent about 1/4) which would set me back 50-100$ each for and there is no way I'm willing (or able) to spend that kind of money on it.  So I'm kind of debating whether to give it up completely or just go for the non-short printed ones, which are way more affordable.


Anyway, that concludes my summary of the Tokai regional issues.  Basically the ones from the 1974-75 and 1975-76-77 sets remain affordable (despite seeming to be about equally rare) while the ones from the other sets are all insanely expensive.