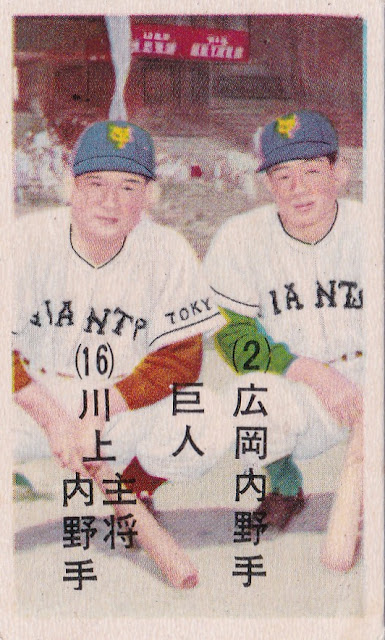 I like multi player cards that have a theme which wasn't intended at the time they were made. This is from the 1959 Marusho "Two Bat" set (JCM 38b), so named because of the two bats on the back.  This specific card I like to call the "mean managers" card for reasons I'll get into below (but as you can probably infer without much difficulty, its because both players depicted on it became mean mangers later in their careers). 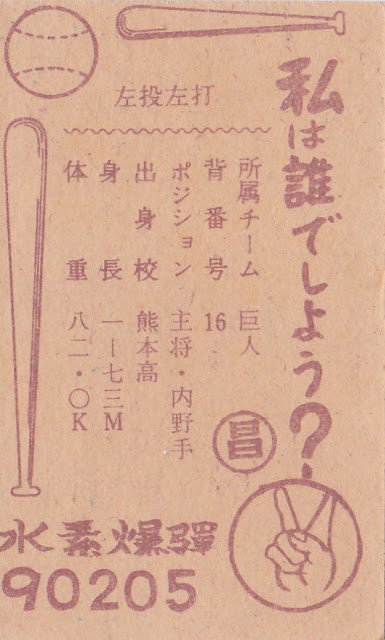 This is actually a really rare set, Engel lists it as R4, meaning fewer than 10 copies of each card in it is known to exist.  I have only 3 cards from it, this is the only one featuring any Hall of Famers.

The two players are Hall of Famers Tetsuharu Kawakami and Tatsuro Hirooka.  Kawakami in particular is very famous for his playing days, he was the first Japanese player to collect 2,000 hits and is known as the "god of batting".  He was also the manager of the Giants from 1961 to 1974 which included an incredible 9 year run of consecutive Japan Series titles.

Kawakami had a reputation as a fiercely competitive manager who really drove his players.  He is the prototypical "mean manager" in Japan who runs a strict ship with lots of rules and intense training regimens and who demands total obedience from his players.

A few years after this card came out, in 1964, Kawakami was managing the Giants and Hirooka had become a player-coach.  The two didn't really get along well, Hirooka had a temper that led him to sometimes rebelling against Kawakami.  In one incident while Hirooka was at bat and Shigeo Nagashima was on third, Nagashima tried unsuccessfully to steal home.  Hirooka viewed this as a sign that Kawakami had no faith in his ability as a hitter and had a violent outburst when he returned to the bench, needing to be restrained by other coaches.  Kawakami wanted to trade Hirooka following this, but Hirooka appealed directly to Giants owner Matsutaro Shoriki, who vetoed Kawakami.  Kawakami nonetheless played Hirooka less the next year and by 1966 his playing days were over.

Their animosity carried over after Hirooka's retirement when he started working as a sports reporter.  He followed the Giants to Spring Trainging at Dodgers Town in Vero Beach Florida, but Kawakami refused to give him any access, and ordered every player on the team to not say a single word to him!

Ironically despite their differences, Hirooka would later go on to be a manager who is often cited as closely fitting Kawakami's disciplinarian mold.  From 1976 to 1979 he managed the Yakult Swallows, during which he led them to a Japan Series Title in 1978.  If you ever read Robert Whiting's You Gotta Have Wa (which you should), Hirooka is cast as the villain in one chapter focusing on Charlie Manuel's time with the Swallows under Hirooka.  Hirooka, who instituted strict rules on player behavior, didn't get along with Manuel and constantly berated him during his tenure, then traded him to the Buffaloes despite Manuel being the team's top hitter.  This contributed to a first-to-worst decline for the Swallows from 1978-1979 and Hirooka's own departure.

After that he famously built the dominant Seibu Lions team of the 1980s.  His strict regimen there is summarized by Whiting who described his "autumn camp" with the Lions thus:

"Lasting 59 days, from season's end to late December (a time when most American ballplayers are relaxing in front of television), it consisted of nine hours of daily drills, including 600 swings a day for each batter, 430 pitches a day for each pitcher, as well as swimming and aikido (martial arts) sessions. Last winter, he sent the Lions' star shortstop to any icy mountain river, hoping an act of self-immersion would strengthen the player's spirit and help make him a better leader."

Hirooka would lead Seibu to three first place finishes in his four years as manager, but would be kind of ousted as manager following the 1985 season (in which Seibu finished first, but lost the Japan Series) after a confrontation with the team owner.  He wanted more control over the team and offered to resign as an apparent bargaining ploy, but his offer was unexpectedly immediately accepted.  Thus ended his career as a field manager, though he would later serve as GM for the Marines and again serve as a sort of minor villain in a  Whiting article about Bobby Valentine's tenure there.

So this is basically a card featuring two people who I would never in a million years want to work for. Which is kind of neat.