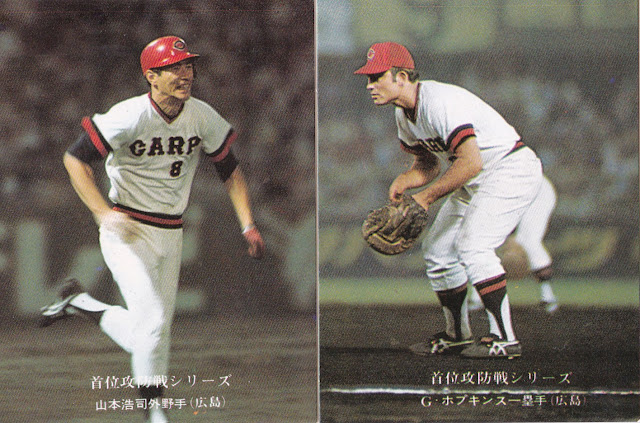 This is the first in a series of posts I’ll do looking at Calbee cards which were only issued in certain regions of the country.  I'll do these posts region by region rather than set by set to give some added local flavor to each post.


The Calbee regional issues are a bit confusing to American collectors because there is no parallel in American baseball card collecting history.  These weren’t complete sets that were just issued in one region, but rather they were series within the main Calbee sets in some years which were.


The existence of these regional series explains a lot about why some vintage Calbee sets are nearly impossible to complete today.  An equivalent in North America would be if Topps had only issued cards numbered 120 to 190 in the 1972 Topps set in the Houston area.  And because they were only selling them in the Houston area, the print run was only about 5% of what the print run for the other series are.


So anybody wanting to complete that 1972 Topps set today would be faced with the difficulty that 70 of the cards in the set were insanely scarce compared to the rest, and almost all of them are in the hands of collectors in Houston.

Oh and also cards numbered 330 to 400 were only issued in Baltimore, so once you've dealt with the Houston card problem you have to head there.


This is exactly the situation that anyone trying to collect Calbee sets from the 1970s (and to a lesser extent some sets from the 80s and 90s) is faced with.


To understand the geography of the regionals, its helpful to take a look at a map of Japan divided by region. There are actually a lot of loose ways of categorizing Japan’s 47 prefecture by region, but I think for the highly specified purpose of understanding Calbee baseball card distribution, this one here from Wikipedia works pretty well, albeit imperfectly. 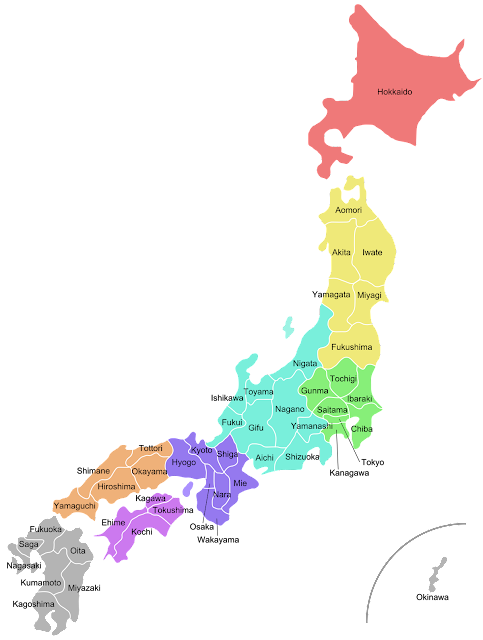 Six of these warrant mention since they overlap with regions Calbee issued its regional series in.


Starting from the lower left we have the grey island which is Kyushu. It consists of seven prefectures one of which, Fukuoka, has at varying times been home to an NPB team.  Today that team is the Softbank Hawks, who moved there from Osaka in 1992.  This marked the return of baseball to the region after the Lions relocated from Fukuoka to Saitama in 1979.  Kyushu hasn’t had many Calbee regional issues released there but it does have some so I’ll do a post about them.


Moving to the right onto the main island we have the orange Chugoku region.  This consists of five mostly rural prefectures, the most important of which being Hiroshima, home of the Carp and the region’s only major city, also called Hiroshima.  Despite its mainly rural character, Calbee issued a lot of regional series here which mostly feature Carp players so I’ll do a big post about them.


Moving further over we have the purple-blue Kansai region.  This is Japan’s second most densely populated area and contains the major cities of Osaka, Kobe and Kyoto.  Several baseball teams have been based here over the years, including the current Hanshin Tigers and Orix Buffaloes.  The latter is the successor to two previous teams, the Kintetsu Buffaloes and Orix Blue Wave, which also played here, as did the Hankyu Braves (the predecessor to the Blue Wave) and the Nankai Hawks (who now play in Fukuoka).  Despite being such a major baseball center, Kansai has had fewer regional issues than the Chugoku region.  But it still has had some so I’ll do a post about there too.


Next to the Kansai area we have the light blue Chubu region.  The map here is not so useful since that area actually includes three regions (Tokai, Koshinetsu and Hokuriku). Only one of these, the Tokai region, is one where Calbee issued regional series.  The Tokai region is centered on four prefectures and is the third largest urban center in Japan, lying between #1 and #2 (kind of like Chicago being in between New York and LA).  Nagoya is by far its biggest city and is home to the Chunichi Dragons.  Like Chugoku Calbee issued a lot of regional series here, mostly featuring Dragons players, so it gets a big post too.

Next to that is the green Kanto area, Japan’s biggest urban area.  Its basically Tokyo/Yokohama and their massive suburbs.  It has been the host of too many baseball teams over the years to count, and currently accounts for almost half the teams in NPB (the Giants, Swallows, BayStars, Lions and Marines).  Perhaps because of its size and significance it hasn’t been on the receiving end of as many regional Calbee issues as smaller areas like Chugoku and Tokai, but it has had some, so it also gets a post.


Next to Kanto you have the yellow Tohoku region, which is home to the Eagles in Sendai, but as far as I can tell hasn’t had any Calbee regional issues so I’ll skip it in this series.  Then up on the top right you’ve got Hokkaido, home of the Fighters in Sapporo, which hasn’t been a major receipient but has received some so I’ll do a quick post about them.


I skipped over the purple island, Shikoku, which is the only region in Japan that has never had an NPB team, nor has it ever had a Calbee regional issue.  It’s a nice island but mostly rural and doesn’t have any major cities so I’ll skip it too.

Next week I'll put up the first post looking at the Tokai regional issues because that is where I live!