A Sadaharu Oh for the Monster 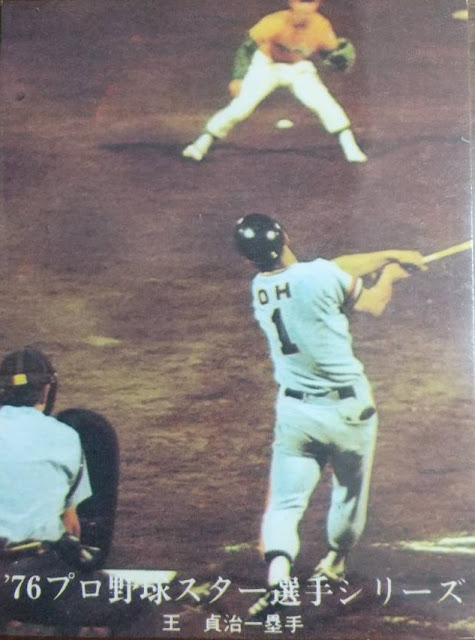 I made a key addition to my monster 1975-76-77 Calbee set yesterday with the addition of this card of Sadaharu Oh. 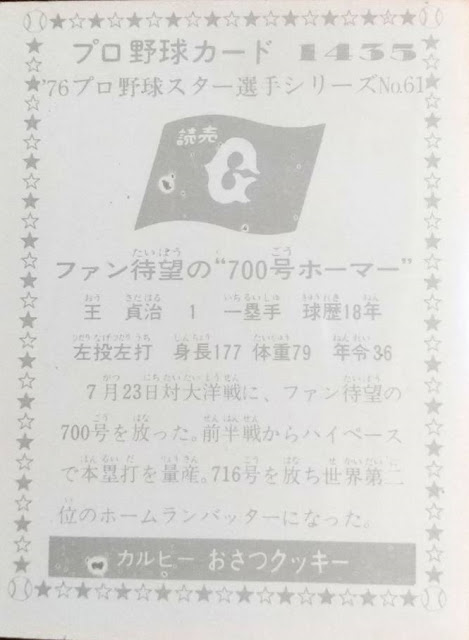 This is probably the hardest Sadaharu Oh card in the whole set to get.  It is card #1435, the second last in the whole thing, which means it is in the very hard to find final series (1400 to 1436).  I only have about 1/3 of the cards from that series so the last pages in my second binder (the set is so big you need two binders to hold it) are among the emptiest of all.

Oh doesn't appear in any of the scarce regional issues (which only feature Hiroshima Carp and Chunichi Dragons players).  The only other Oh cards which might match this one in scarcity therefore are card #474 (from series 14 which was short printed) and #943 (from series 27, also short printed).  I don't have either of those so this is the first of what I guess might be called the "Big 3" Oh cards from the set that I've obtained. Series 23 (cards 789 to 824) also tend to sell for a bit more than cards from the rest of the set and every one of them features Sadaharu Oh (its a series in commemoration of his 700th home run) but I think they just sell for more because they feature Oh and not because they are scarcer.

This came up for auction last week and I was expecting it to sell for around 3000 Yen or so. I decided to bid high and break my self imposed 1,000 Yen spending limit since this card only comes up for auction rarely.  Much to my surprise and delight I won it for about 1,000 Yen with shipping, which was a steal.  It arrived in the mail yesterday and is now resting comfortably in the last page of binder #2 for this set.  I don't have card #1436 yet so for now this is the highest one I have.

The card is pretty cool.  It features a scene from a game played on July 23, 1976 against the Whales.  The text refers to him hitting his 700th home run during that game (though obviously not during the at bat depicted in which he has clearly hit a liner back to the pitcher) and notes that later in that season he reached 716, making him #2 in the world.
Posted by Sean at 6:58 PM