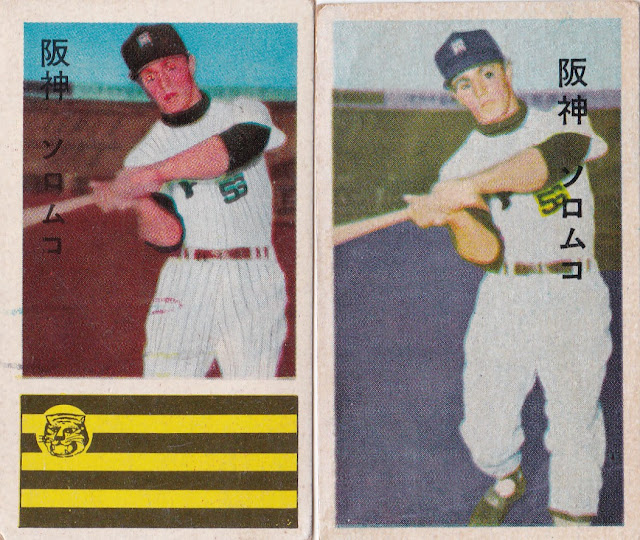 Back in the 1960s Japanese makers of baseball menko used to re-use photos a lot.  Topps did that in the US too back then, but menko makers had the advantage of being able to hide their tracks a bit better.  Since they used colorized black and white photos they could just change the colors on the same photo from year to year.

The above cards of Hanshin Tigers slugger Mike Solomko put out by Doyusha in 1961 and 1962 (JCM 35 and JCM 55) provide a good illustration of this.  Same photo, different colors.  Actually the colors make no sense on either - the outfield grass at Koshien is neither red nor blue!  But it does kind of look cool so I give them a pass on that.

Solomko is  an interesting guy.  He  came to Japan while serving in the United States Army, he arrived on a destroyer by chance after getting switched from one destined for Korea.   He got a tryout with the Tigers towards the end of his service, and ended up playing in NPB for six seasons (four with Hanshin, two with the Orions).  I don't know of any other player who came to Japan via that route!

He is also one of the few Americans to settle down in Japan after his playing days ended.  60 years after arriving, he is still here! From that perspective, he is one of the godfathers of us "long term foreign residents of Japan" and I collect his cards partly out of respect for that!
Posted by Sean at 8:03 PM