The Problem with Calbee: 2018 Series 2 is here! And has the worst photo selection Ever

Series 2 of this year's Calbee set was released a little while ago and as with Series 1 I decided to put the set together all in one go from a re-seller on Yahoo Auctions.

I got them in the mail on Monday and.....much though I love Calbee I have to say that I'm not impressed.  Something has been bothering me about Calbee cards for a while now and I had a tough time putting my finger on it until yesterday when flipping through them I realized the problem: consistently unimaginative photo selection.

The photographs in this year's set are the most abysmally predictable ever (I think, they seem to have been doing this for a while now).  I flipped through the entire set of regular cards and realized that the photograph selection progress is entirely governed by three rules which just make this set frustratingly boring.

Rule #1:  All position players are to be shot at home plate in some stage of a swing.

The above are all the position players from the Hawks in the set.  Everyone of them is photographed taking a swing, all of them in the exact same location - that same damn pink sign is visible in the background of all of them.

This is repeated throughout every single team - they are all pictured taking swings, all of them in the exact same spot, with the exact same background.  There is not a single picture of  a position player actually playing the field at his position (except for covered by Rule #2 below).  Or running the bases.  Or in the dugout, or anything else.  Its insanely monotonous to flip through these horrible cards.

Rule #2: The only Exception to Rule #1 is for catchers.

For some reason catchers are allowed to appear at their position in their catching gear.  They are the only position player so honored, though only five of them get that treatment, the rest being pictured in generic swing pictures.

Rule #3: Every pitcher is to be shot while pitching 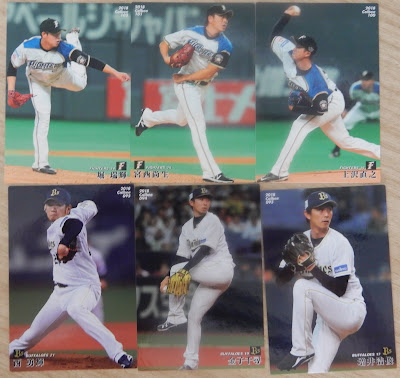 Batters have to be batting, so I guess they decided pitchers also always have to be shown pitching.  This again however creates a uniformity of backgrounds that makes the cards boring and monotonous to flip through - all the Nippon Ham Fighters pitchers have that same boring green wall in the Sapporo Dome and bit of artificial turf as the backdrop, all the Buffaloes pitchers have the same....boring blue wall in the Osaka Dome as the backdrop, etc etc.

There are no pictures of pitchers doing anything other than being at some point in their wind up - nobody fielding a ground ball, nobody running over to cover first, nobody batting or running the bases or even just posing....its so insanely boring.

Of the seventy base cards in the set there is only ONE which does not slavishly follow these three rules.  It is this card of Takahiro Norimoto celebrating his 1000 strikeout: 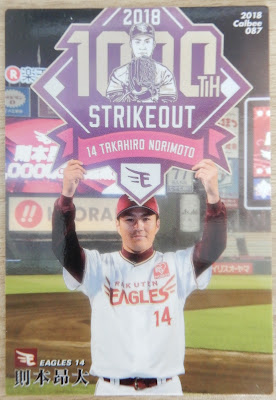 Its stands out so much from the other cards in the set that it is refreshing to look at and see....something other than the dugout or bottom of a boring outfield wall as a background.

This photographic laziness is frustrating given the awesome backdrops that they could work with at places like Koshien or Hiroshima's Mazda Stadium.  Its also frustrating given how quirky and awesome photography on Calbee cards used to be, even in the era where they sometimes resorted to taking stills off of TV screens to fill in their needs.

I wonder what the cause of this is.  One thing I notice is that all Calbee photographs are taken either of a player at home plate or on the mound, both of which can be taken from a single location near the dugout.  This suggests either extreme laziness or perhaps the teams have started limiting the access of Calbee photographers to just taking pics from one spot, though I could not imagine why that would be the case. Even if true this also doesn't really explain why they couldn't just take a few pics of guys fielding balls or running the bases to mix things up a bit, as such shots could easily be obtained from the same location.

Whatever the reason, I am quite disappointed.

Email ThisBlogThis!Share to TwitterShare to FacebookShare to Pinterest
Labels: 2018 Calbee