The oddest of oddball sets 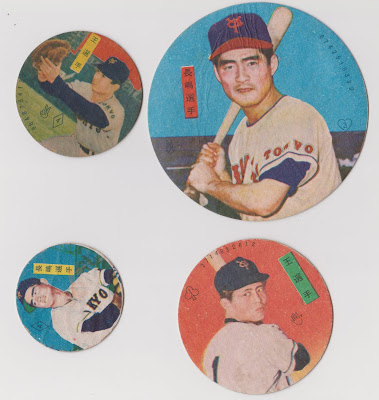 I picked up a really odd set the other day: the JRM 38 1960 Oh and Nagashima Menko set.

This is a picture of the entire set - at just four cards its not a hard one to complete even though it is a bit scarce (in my case I got all four in one go).  It features two cards each of Sadaharu Oh and Shigeo Nagashima.  According to Engel they were able to date the set thanks to the uniform Nagashima is wearing on the biggest one, which was the Giants' 1960 uniform.  On the other three they are all wearing uniforms from 1959. 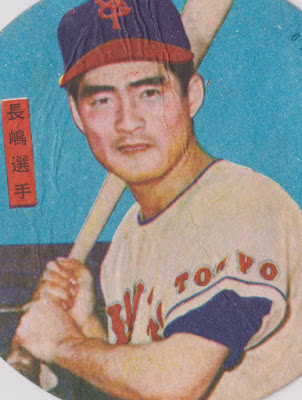 What really makes this set odd though is that none of the cards are the same size as each other.  They get progressively bigger, with Nagashima being on both the smallest and the largest, while Oh is on two that fall in the middle, but aren't the same size.

I don't know of any other card set out there where this is the case.  Even in the bizarre world of Japanese cards from the 50s and 60s, while there are a number of sets which have cards of differing sizes in most of those there are several cards that share the same size (like my good old JRM 8s). I think this is the only set where each single card is of a unique size.

Having acquired the set I now have to figure out what to do with it.  How in god's name are we meant to store these things?  Can't put them in binder pages, can't put them in regular card boxes, can't put them in holders (except the two smallest ones, the larger ones are too big).  I do have a folder for my oversized cards, so they'll probably be temporarily housed in there, but it isn't the best in terms of displaying the cards so I will need to work on that. 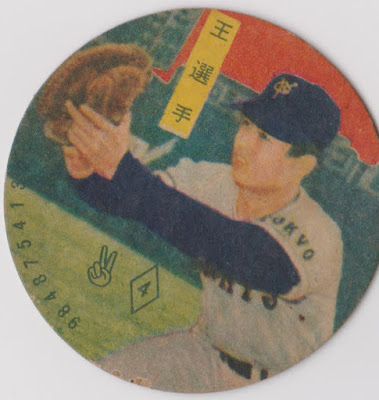 Storage issues aside I do really like these cards, they all have pretty good images of Oh and Nagashima on them, with striking background colors.  So its a cool set to have!
Posted by Sean at 6:06 PM