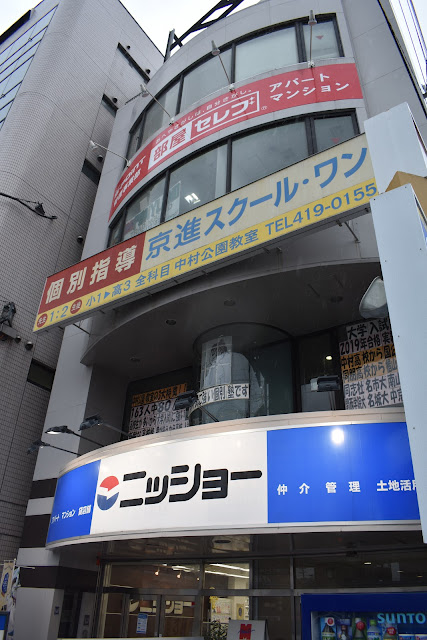 After finishing our shopping at Bits, Dave and I decided that the next card shop we would hit would be Mint Ponyland out by Nakamura Koen.  So we hopped on the subway at Kokusai Centre Station and about 15 minutes later emerged from Nakamura Koen station.  Mint Ponyland is almost next door to the station (if you visit, take exit 2 and its about 1 minute walk away) so it is extremely convenient to get to.

Mint Ponyland is part of the Mint empire, which is a chain of about two dozen card stores across the country.  When I was living in Fukuoka I used to sometimes visit their Kashii location (since closed) which was a kind of decent little store so I was curious about what Nagoya's Mint was like.

Like Bits the Mint Ponyland is a bit hard to find unless you do your research in advance because there are no visible signs of it at street level save for a tiny sign in the doorway.  It is on the 3rd floor of the above building but none of the three billboard signs you see are for it (they are for apartment rental agencies and a cram school).  If you kind of squint you can make out some card related signs inside the third floor window, but they are hard to see.

We took the elevator up to the third floor and found the store entrance: 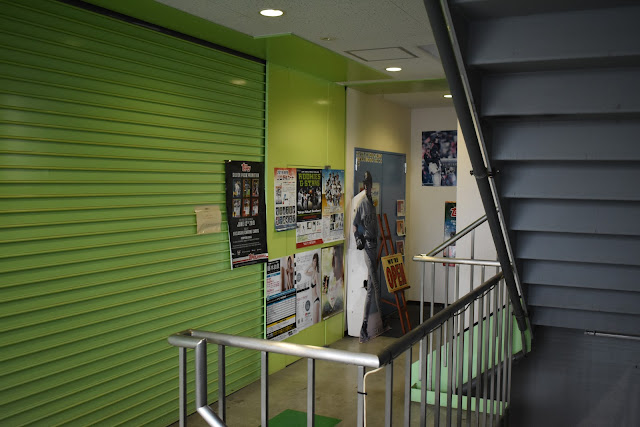 Seeing the shutters closed like that I said in disappointment "Oh no, they are closed!"

Dave, who is a much more practical guy than I am, calmly replied "Um, why don't we just try opening the door?"

"Aha! That works!" I said with some embarrassment at my initial defeatist reaction as I successfully turned the knob and found that the door did in fact open onto a store that was open for business.

On entering we were both a bit surprised by how big it was, the floor space is massive by Japanese standards. 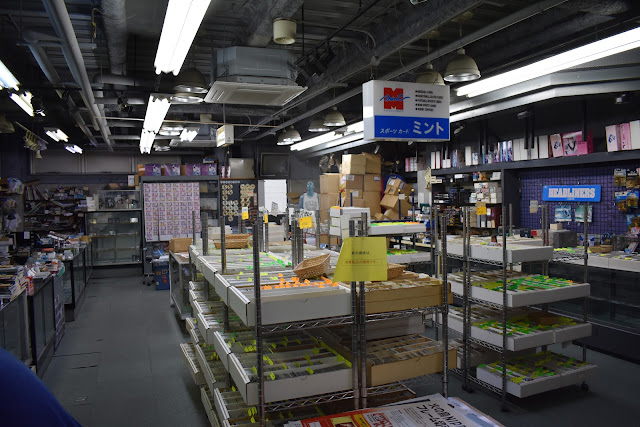 The shop proprietor was seated in the back working on a computer and didn't pay us any mind as we entered.  So we decided to browse.

As with Bits, Mint Ponyland has stacks of monster boxes on shelves.  They have a lot of baseball and soccer cards, but a noticeably larger proportion of their stock is idol cards, many of them featuring full frontal nudity which may come as a shock to someone just looking for baseball cards (ah....Japan!)

Dave got out his checklists and tried to find a few he needed but didn't have as much luck as he had at Bits.  I'll leave it to him to discuss that on his blog, but I don't think their selection of BBM singles was as good as at Bits.

Dave wanted to know if they had any full sets and we asked the proprietor, but he said they don't sell sets, only singles (I think me meant they didn't put together hand collated sets, they did have some boxed sets, etc).

I did some browsing myself too.  One amusing and kind of nostalgic thing that I noted was that they had a couple of monster boxes devoted to cards of MLB stars, organized by player. It reminded me a lot of the box of star cards that we had at the card shop I worked at with my dad in the early 90s, which I actually fished out of storage in 2015. This was driven home by the fact that their player selection obviously hadn't been updated in about 25 years - they had sections devoted to guys like Bobby Bonilla, Dave Cone and Joe Carter who haven't been the subject of much hobby attention since the early 90s (and nobody who debuted later than the 90s).

This relates to a critique I would offer about Mint Ponyland - the store is kind of a mess and doesn't look like any serious attempt has been made to make it presentable to the public.  Empty boxes are stacked up haphazardly everywhere and the whole place is littered with clutter.  I suspect that they do most of their business online and the store is treated more like a warehouse that customers sometimes happen to visit rather than a regular store that is open to the public (not a single customer visited while we were there I should add, though it was a Tuesday afternoon so not necessarily a busy time).  The fact that a lot of the stuff they have in monster boxes on sale obviously has just been lying there collecting dust for decades adds to that feeling of disinterest in creating an attractive shop (this is a huge contrast to Bits, which is very tidy and well organized).

Another critique I had was the lack of vintage Calbee (or anything else). They had a tiny little box on the counter which had maybe a hundred or so Calbee cards from the 70s and 80s and that was it.  Dave was able to find a nice purchase out of it (which perhaps he'll cover in his post) but I gave it a pass and left without buying much. 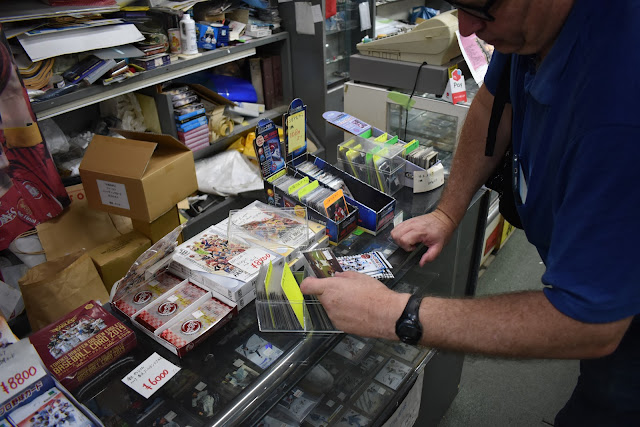 Despite my criticism of the shop's condition I should add that the guy there was quite nice and responded to our questions in a friendly manner.  I was curious about the huge size of the shop and he said that since they owned the building they could basically do whatever they wanted with the space (which I should add may not be a good thing!)

The contrast between Bits and Mint Ponyland calls to mind a division that exists within the city of Nagoya itself.  Nagoya is cut in two by the main train tracks, including the shinkansen, that run through Nagoya station.  The east side, where Bits is, is much more developed than the west side where Mint Ponyland is.  Almost all of the main shopping streets, department stores, etc in Nagoya are on the east side, while the west side is kind of a boring backwater once you get a couple of blocks away from the station.  This isn't necessarily the reason for the shops being different but while I was in Mint I just kind of had that "this is definitely the west side of the station" feeling in my mind.

I'm not sure about making a recommendation with respect to Mint Ponyland.  Its definitely very easy to get to if you are in Nagoya, and the guy who works there is quite nice, but the selection and presentation of the cards they have is kind of "meh".  This could be just because they didn't have the cards that I was specifically looking for though, if you are looking for some early 90s Bobby Bonilla cards its probably your best bet in Nagoya to find them (kidding, but actually true).