Piles of 1940s Menko are so awesome 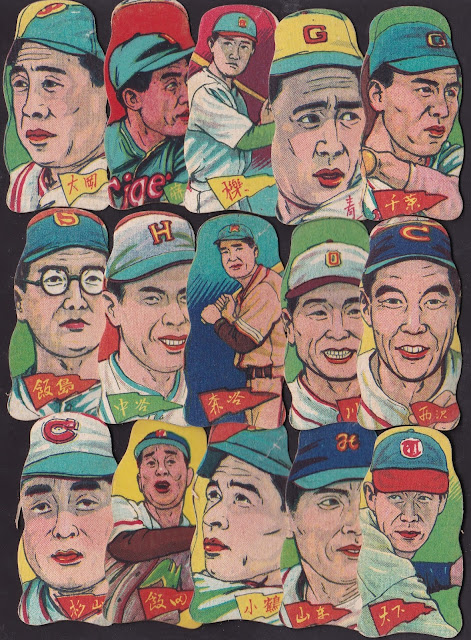 I pulled the trigger on a big lot of old menko a few days ago.  I got insanely lucky actually.  An antique dealer in Shizuoka prefecture had happened across a hoard of about 1,000 vintage menko from the late 1940s.  Most of them were non-sports but about 1/3 were baseball.  He broke them up into four lots with a mix of about 280 menko in each and put them up for auction.  The baseball ones were scattered evenly across all four lots.

I put place holder bids in on all four of them.  The bidding went up quite high on three of them, once they went over 100$ I dropped out and they ended up going for prices between 160$ and 260$ per lot.

But the fourth one for some reason didn't get the same love and I ended up winning it for about 80$, which was crazy.  Looking at the baseball menko I couldn't figure out why the one I won went so cheaply since it had some amazing stuff in it which was comparable to the ones that went for double or triple the price. Possibly there were two bidders who were so focused on the other three, which ended at about the same time, that they forgot about the fourth lot.

Anyway, their loss, my gain!

My lot had nearly 100 baseball menko from the late 1940s in it and let me tell you - sorting through a lot of 100 1940s baseball menko featuring a solid mix of hall of famers is a collecting joy like no other.

I think the highlight of the lot were cards from the 1949 Kagome Die Cut set (catalogued as JD4 in the Engel guide), pictured above.  This set is really beautiful - the artwork features realistic images of the players done in some extremely vibrant colors.  It has some of the biggest name stars of the era like Tetsuharu Kawakami, Noburo Aota, Hiroshi Oshita and Michihiro Nishizawa. 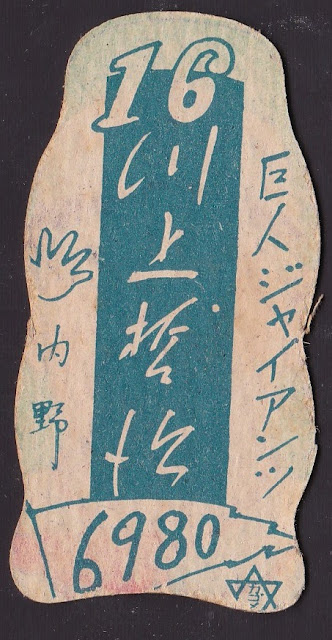 The set has 16 cards and I found.....15 of them in the lot!  Everybody except for Kaoru Betto, whose card has shot up to the top of my menko want list as a result.

There are quite a few cards from other sets which I'll have to organize, though this was the only "near set" in the pile.

In addition to the hundred or so baseball menko, I now also own about 180 non sports menko from the same era, which I'll have to sort through and find some way of appreciating too.  It'll be nice winter / Covid induced downtime project!