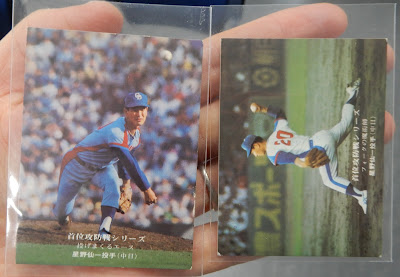 My 1975-76 Calbee project took a major leap forward last week with the above two cards, which were Yahoo Auctions wins.  Both depict Hall of Famer Senichi Hoshino during his prime days as a pitcher with the Dragons.  I'm a huge Hoshino fan and was extremely sad when he passed away last year.  If for no other reason than his being the leader of the anti-Giants resistance, I had a lot of respect for him.

These two cards though were tops on my want list because they are among the "key cards" in the whole set. Both of them (57 and 69) are from the rare Nagoya only regional series and, since they feature Hoshino, are the most valuable cards from that series (according to my copy of SCM anyway).  In fact, they, along with the Hiroshima Municipal Stadium cards in the Hiroshima only regional series, are the most valuable cards in the whole set (again according to my copy of SCM). 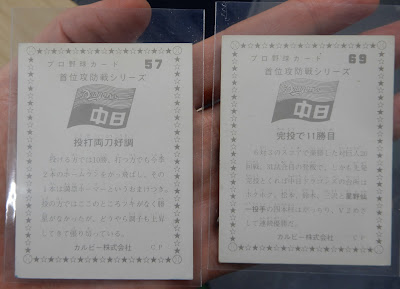 They were a lucky find.  A seller I had never dealt with put a dozen or so cards from the Nagoya regional series up for auction with 1 Yen starting bids.  The other cards were commons in various conditions (from about fair to ex or so) and I put 1000 Yen bids on most of them, to see if I could get them for the same price I scored my Hiroshima regional issues for the other day.

Something came over me with the Hoshinos though, I just felt I HAD to have them.  I'd never seen them come up for auction before.  So for those I put 5000 Yen bids on each and walked away from my PC.

When I came back the morning after the auction had finished I found that I had been outbid on all the commons, but the Hoshinos were mine!!  Yes!

So I think I can say that I am "making good progress" on the Nagoya regional issues too now!  And my set now has two of the keys to its completion, proudly in their pockets!

The only downside is that there are actually three Hoshino cards in that Nagoya regional series, so I still have one more to track down.