The Most Valuable Card is a Lucky One 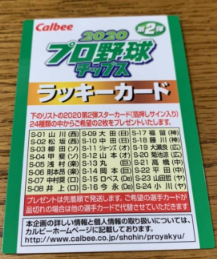 This is the most valuable card by far that you can get in packs of 2020 Calbee Series 2.    It is a "Lucky Card".
Calbee Lucky Cards have been around for a while.  Back in 2004 I tried putting the Calbee set together the old fashioned way: buying lots of bags of chips.  I didn't get anywhere near to finishing it (and 16 years later I am still short), but one thing I did get that year was a few lucky cards.  In 2004 you had to collect three of them, then cut the tabs off the top of them and glue them to a postcard which you would mail to Calbee.  In exchange, Calbee would send you a pretty cool boxed set of "Star Cards" featuring gold embossed signatures on them.  There were 3 of those boxed sets for each series and I was able to get the first two, but fell one Lucky Card short of being able to get the Series 3 one.
It was fun though, slowly accumulating them over the course of the summer, then sending the envelope off and waiting by the mailbox until my sets arrived.
The Lucky Cards work roughly the same way this year, when you get one you cut the green tab off the upper left hand corner of the back, glue it to a postcard and mail it in.  In fact, the card looks almost identical to the ones I remember pulling back in 2004, with the colors changed a bit.
This year instead of collecting three you just have to get one.  But also instead of getting a box set you just get two cards out of a 24 card set featuring various stars ("Kira Cards"), so there is a bit of a tradeoff there.  You would need at least 12 of these cards to finish that set.  You are allowed to designate which of the 24 cards you want, so you don't receive random cards and can avoid getting doubles, though they actually ask you to nominate two alternative card choices in case they run out of certain players, so it isn't guaranteed that you will receive the ones you want. 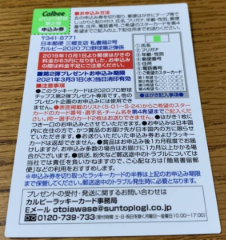 Back in 2004 there wasn't much of an online market for Japanese cards so I had no idea how much they were worth.  But these things are really "Hot" on Yahoo Auctions, I've been following auctions of them and they always sell for over 3,000 Yen each (about 30$ US).  The photos I'm using here come from an auction that just ended at 3400 Yen.  There are dozens of them up at any given time and they don't seem to be having trouble finding buyers.
At that price, factoring in shipping and also the cost of sending the postcards, you'd be looking at spending about 43,000 Yen (430$ US) to complete that 24 card set.  Which is way too much for me to be interested.
Happily though this also explains why I can buy complete base sets of Calbee for  900 Yen including shipping.   The Calbee case breakers basically make all their money off the Lucky Cards and everything else is just leftovers.
I've bought a few bags of Calbee chips this year despite having purchased the base sets, in part just to see if I could land a Lucky Card, but I've come up empty so far.  I'd like to land one just so I can mail in the postcard and wait by the mailbox for the cards to come.  Actually, that is another thing that makes 2020 much different from 2004.  Back in 2004 getting baseball cards in the mail was a huge novelty since I didn't have a Yahoo Auctions or even Ebay account back then and made all my purchases in person at stores.  Now I get cards in the mail all the time so the novelty value is kind of lost.  But it would be cool nonetheless.
Incidentally another interesting thing about these cards is that they are ticking time bombs.  They expire on March 31, 2021 after which they can no longer be redeemed and basically become worthless.  Yahoo Auctions has a ton of 2020 Lucky Cards being bid on like crazy, but any remaining Lucky Cards from 2019 or earlier are basically worthless and very few sellers even bother to list them for sale.  I still have my two unredeemed 2004 Calbee Lucky Cards sitting around somewhere, I held onto them for sentimental reasons!
Posted by Sean at 7:08 PM

Email ThisBlogThis!Share to TwitterShare to FacebookShare to Pinterest
Labels: 2020 Calbee