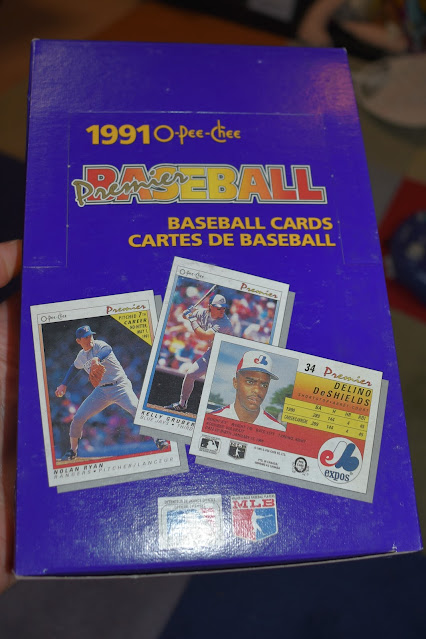 In the 1930s physicist Erwin Schrödinger came up with his famous hypothetical cat in a box who could be either dead or alive at the same time.  I don't pretend to understand much about quantum mechanics, but I think his point was to ridicule an idea in the field at the time which stated that subatomic particles could exist in different states of being simultaneously until someone actually took a look at them, at which point they'd have to choose one state and stick to it.  If this was true, then a cat stuck inside a box which nobody could see whose life was dependent on a subatomic particle being in one state of existence rather than the other would be both alive and dead since the particle itself would exist in both one state and the other at the same time.

Got that?  Well, in all honesty I don't either, but the gist of it is that intelligent people were toying with the question of whether something can be two things at once until someone actually sees them, in which case they can only be one thing. 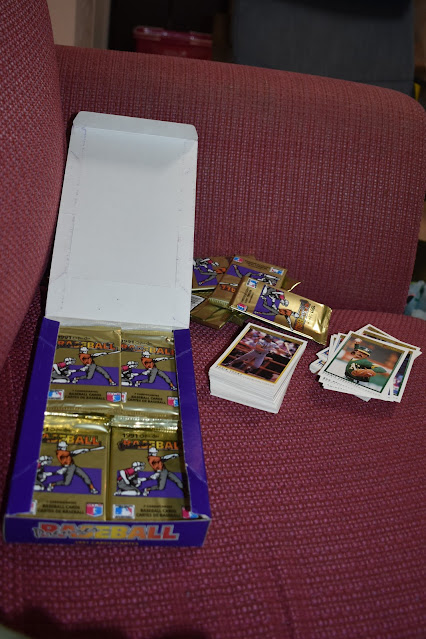 This may seem an odd way of prefacing a blog post about a full box of 1991 O-Pee-Chee Premier that I recently picked up on Yahoo Auctions but bear with me, my reasons will soon be apparent. 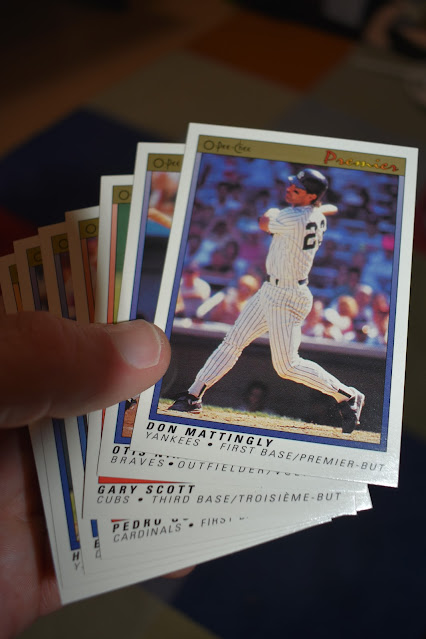 I remember back in 1991 packs of O-Pee-Chee Premier were - very briefly - the most heavily anticipated thing in the baseball card world. The previous year's hockey release had been a massive success, I remember packs of that disappearing from shelves in seconds and single cards from the set being highly sought after at shows that year.

Everyone thought the baseball set, which is identical in design, would repeat that success.  It came out a bit later than the other releases that year, and I remember that in the first Beckett to come out with them listed the prices were extremely high - the Frank Thomas was like 15$, way more than his cards in any other set that year up to that time.  It looked like it would be a huge hit. 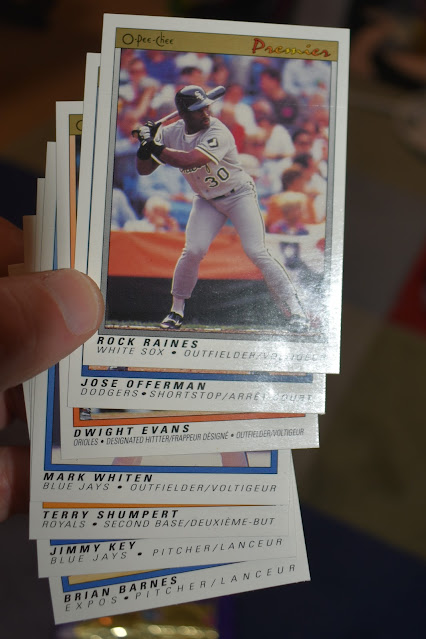 But then, suddenly, it wasn't.  O-Pee-Chee predictably ran the presses overtime and made way more of these than it did for the previous year's hockey set.  When this became obvious just a few weeks after its release, demand for it tanked almost instantly.  I think the second or third issue of Beckett after its release was one of those ones where every card in the set was listed with a black downward arrow next to it.  It got so bad that a few issues later Beckett stopped listing them altogether (I might be wrong on some details here, I don't have my old Becketts anymore and am just piecing this together from 30 year old memories).   And when 1992 O-Pee-Chee Premier came out, nobody paid much attention. 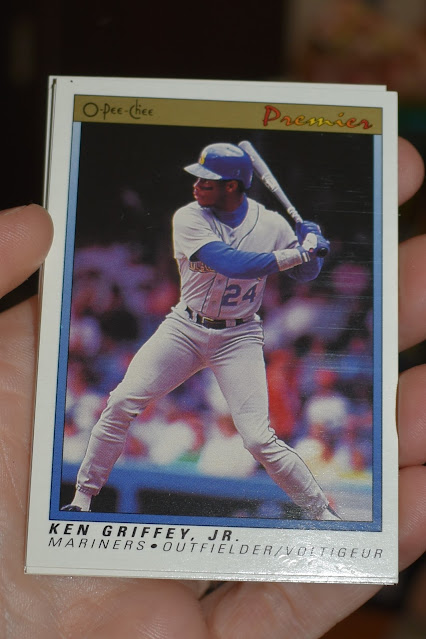 The result is that this is just another junk wax set which there are still enough unopened wax boxes of out there that even a guy all the way in Japan can find them cheap (well, its actually hard to find them here but still, I did find one cheap). 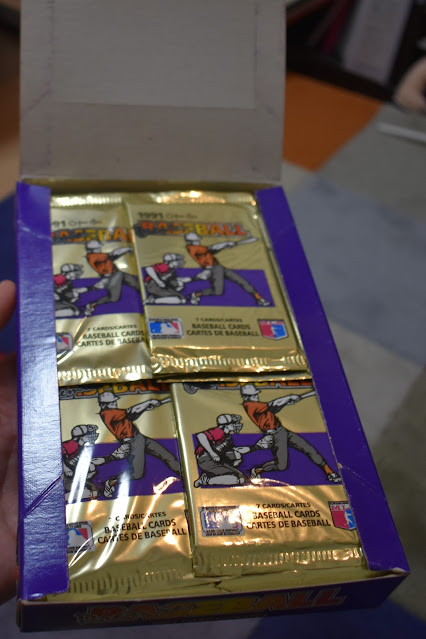 Anyway, how does all this relate to the cat in the box I started out with?  It relates to this weird idea that a thing can have two states of existence at the same time so long as nobody is looking at it.
The thing in question is the cards inside an unopened box of junk wax era baseball cards.  The two competing states of existence are 1) having value and 2) not having value.

I have a lot of trouble getting my head around this.  When I pulled the trigger on this box, I was genuinely excited about it.  It took a few days for them to arrive in the mail over the holidays and every day I was out there checking the mailbox.  That is how excited I was.

So there is this weird paradox going on.  Here is a question and response between a fictional interviewer and me on the subject:

Q: "Do you want an unopened box of O-Pee-Chee Premier cards?"

Q: "Because you want the box or something?"

A: No, because I want to rip it open and see those cards SO MUCH! 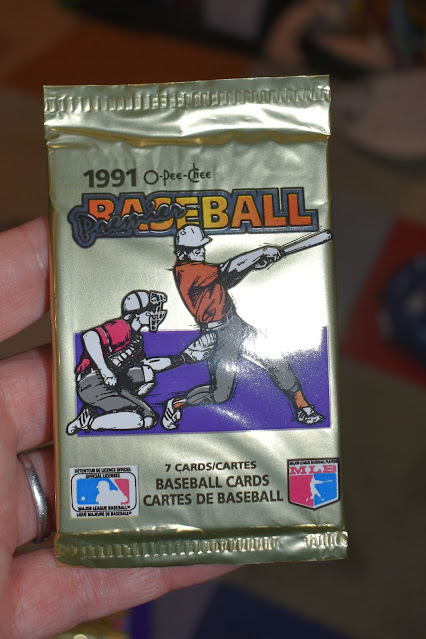 Now look at this photo, of the above pack after being opened. Ugh, Jose Offerman.  You immediately do not want these anymore, right?  And that would be the case even if it was Ken Griffey Jr. on the front, right?
In other words, while these cards are in the pack they seem to simultaneously both have value and also have no value at all to you.  You see the pack and you want to open it to get the cards, which means the cards themselves have value to you.  But at the same time, these cards have no value to you because they are useless junk wax cards that you hate and just don't want the hassle of owning.
Well, by "you" in the above paragraph I really mean "me" but I suspect there are a lot of others out there who know this feeling.  We want junk wax cards only when we can't see them because they are inside a wax pack.  As soon as we open that pack, they become loose junk wax cards that we don't want.  Logically we should therefore keep them in the wax pack, but we don't want the wax pack to remain intact, we want to open it to get the cards we don't want.
The only way of resolving this logical paradox is to recognize that when we buy a box of junk wax we aren't really buying a box of junk wax.  We are paying for the experience of opening a box of junk wax, which retains some value to us.  For a couple of hours I enjoyed pretending it was 1991 again and I was excitedly opening the first box of O-Pee-Chee Premier baseball cards of the year.
Well, actually its an exaggeration to say I enjoyed it for a couple of hours.  The first few packs were fun, but a wax box of a 132 card set isn't the same experience as a wax box of a 792 card set.  You get a lot of doubles.  Mostly of Kirk Dressendorfer, Juan Bell and Gary Scott who are in that set for some reason.  And with each new Dressendorfer, it slowly becomes less an enjoyable experience of opening wax packs and more an unenjoyable experience of being the owner of more and more Kirk Dressendorfer 1991 O-Pee- Chee Premier cards.  But for the first 1/3rd or so of the opening, I was getting the experience I paid for and enjoying it.
Since then, I've been stuck with a bunch of 1991 O-Pee-Chee Premier cards that I didn't really want, even though I really really wanted them.
Posted by Sean at 9:28 PM