Ron Woods: Who is this Guy? 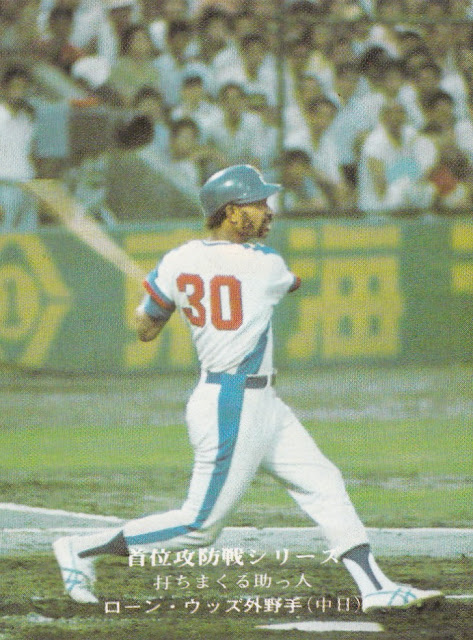 I picked up card #71 from the monster 1975-76-77 Calbee set this week.  This is from the rare series that was only issued in the Tokai area and is thus a key addition to my set.

This gives me 23 out of 36 cards in that series, more than halfway there!

The card depicts Ron Woods. He is kind of an intriguing player about which we know very little.  He played parts of several MLB seasons between 1969 and 1974, getting the most playing time with the Montreal Expos between 1971 and 1974.  He then went to Japan for two years with the Chunichi Dragons in 1975 and 1976.

Beyond the numbers: silence.  Nobody has bothered to write a biography of him on his Wikipedia page, or on his Baseball Reference Page, or on his SABR page.

This is frustrating because there are two intriguing facts about the Ron Woods story that I've been able to glean just from 1) this card, and 2) Googling him, that suggest stories of human interest at work.

The first is from the back of this card. 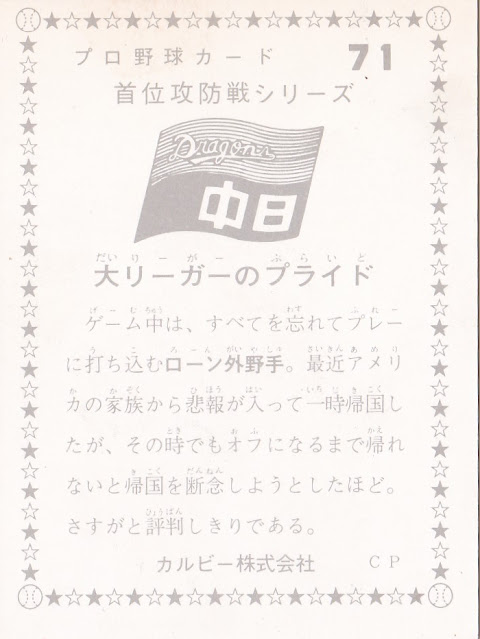 Japanese baseball likes players who sacrifice everything for the game and their team.  A lot of these Calbee cards from the 70s have write ups on the back which extoll this virtue.  This card, titled "Big league Pride" tells us that Ron Woods is a player who forgets everything else in the world when playing.  To illustrate, it states that he recently got tragic news from his family back in America. While he made a short visit back to the US as a result, he was so serious about the game that (on getting the news) he considered waiting until the off season to go back.

So this tells us that Woods experienced a serious personal tragedy during his stay in Japan and faced a difficult decision about whether to go back home to deal with it or not.  This is a recurring theme that shows up in the stories of many American players here - Randy Bass was famously criticized for returning to the US during the season to be with his son who was having major surgery.  So Woods had one of those too, but we don't know anything about it.

The other interesting thing I learned from a Google search is that in September of 1975, probably shortly after this card was made, Woods was among four members of the Dragons who were injured in Hiroshima after being attacked by fans.  This was mentioned in a very brief article in the New York Times at the time, but I haven't been able to find any more info on what happened.

So anyway, it seems like Woods' two year stay in Japan featured some drama, yet we know very little about him.