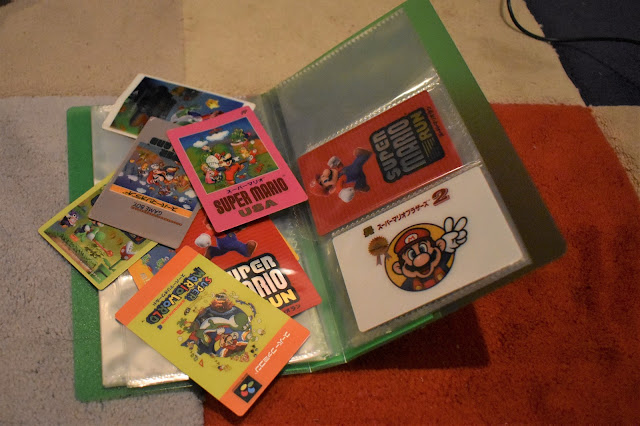 I have two little kids.  I'm a bit torn about whether I want to encourage them to collect baseball cards like I do.  I mean, why would I?  Kids will pursue whatever interests they like and  my role is just to encourage them in whatever that is, rather than trying to steer it to what I like.

But I'm kind of psyched that my kids have taken an interest in collecting cards recently, particularly kid #1 (the elder).    Supermarkets here are now stocked with "Super Mario Bros. History Card Wafers", a snack produced by Bandai. Each of them comes with one card from a 22 card set, featuring the cover art from various Mario Bros. games from the 1980s to the present.

I bought one for him a few weeks back just because he likes Mario and not really thinking about the card.  He ate the snack pretty quickly, and then I noticed that he was really excited about the card too.  He carried it around with him all day.  He brought it to the table with him at dinner.  He even brought it to bed with him when he went to sleep.

Neat, my kid likes cards too.

So since then we've made a point of buying one every time we go to the super market.  I also sometimes stop on my way home to pick one up for him.  And I bought him a little album to put them in.  He's got about half the set.  He gives me his doubles.  Its fun.  It actually reminds me a lot of my own experience as a kid getting interested in baseball cards and my dad sometimes stopping on his way home from work to get some for me.  I now appreciate why he did that for me way more than I used to.

I'm also encouraged that he likes to play baseball with me.  Well, he likes to go to the park with a bat, glove and balls with me and mess around with them.  I'm really on the fence about encouraging him to join a team though.  In Japan, baseball is not played by kids for fun, its an extremely rigid and intense activity which (to me at least) seems to suck all the fun out of it.  If he decides that he wants to join a team, I'll be all in and support him all the way. But if not, I'm not going to pressure him. Anyway, if he ends up getting interested in baseball, he might get interested in baseball cards at some point.  If not, I'm sure he'll find something else cool to be interested in.

Anyway, anybody else out there have kids who they are gently nudging towards an interest in baseball cards?