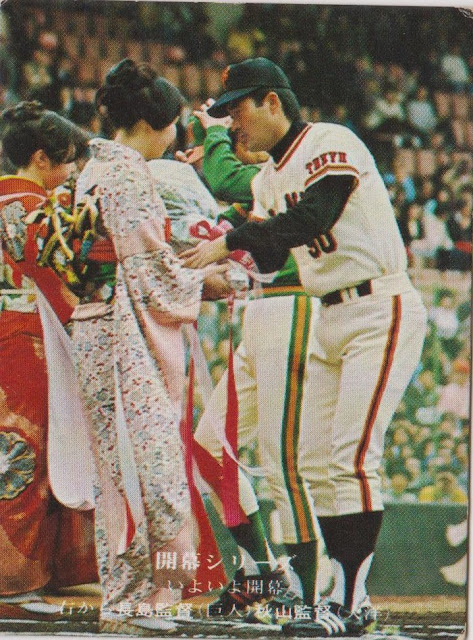 I`ve had a big stack of recently acquired 1970s Calbee cards sitting next to my computer/scanner this week so the temptation to do posts about one of them each day has been too great to pass up.  Today`s subject is the above beauty, mainly focused on Giant`s manager Shigeo Nagashima.

The picture in the card was taken on April 5th, 1975 before the opening day (kaimaku) game at Korakuen Stadium between the Giants and Taiyo Whales (whose manager Akiyama can kind of be seen behind Nagashima). Needless to say, as with the Oh card I wrote about yesterday the main subject (Nagashima) is less interesting than the rest of the stuff in the photo, particularly the two women in kimono.

They are presenting the two managers with bouquets of flowers just before the game, which is something that happens a lot in Japanese baseball games (not necessarily always flowers, but some sort of ceremonial gift).  I did get to learn the Japanese term for that from the title on the back of this card (花束贈呈 - bouquet presentation).

Its interesting that the two women presenting the flowers, who totally steal the show on this card, aren`t named or even referred to on the back text.  I wonder if they are even aware that they were featured on it, and that forty years later a foreigner would pick it up, find their images interesting, and write a blog entry about it.  Probably not.  Interesting how life works out sometimes.

Anyway, its kind of a cool card, depicting a scene that is rarely featured on baseball cards.