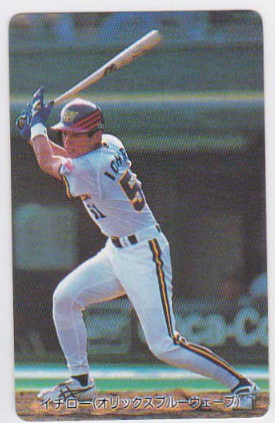 There is a seller on Yahoo Auctions who I've been watching for a few years now.  A few years ago I bought one of the rare 1994 Calbee Ichiro cards off of him.  This was relatively early in my Japanese baseball card collecting days and I wasn't aware of how prevalent fakes of those cards (there are three of them) were.  Of course mine turned out to be a fake as I discovered later.  Fortunately I only paid about 25$ so it wasn't a huge write-off.

If you click on the guy's Yahoo Auctions page you'll see a huge list of naked lady cards (very NSFW, proceed with caution).  Those are his specialty.  But about once every month or so he'll put out a few baseball cards for sale.  And almost every time he does so, he has one copy of each of the three 1994 Calbee Ichiros.

Over the years I've been watching his auctions (er...just his baseball card auctions) he's probably put up dozens of those Ichiro cards.  Bear in mind that those cards are so rare that there are probably only a few dozen legit copies of them in existence in the first place.  So this should be a huge red flag screaming "FAKE" to anyone out there paying attention.

Yet every time he puts them out, people bid on them and buy them.  This post was inspired by me watching three more end last night, all getting multiple bids (the one in the picture at the top got 14 bids and sold for 4501 Yen, about $40).

It really doesn't make much sense.  They always sell, but they also usually sell in that 30-50$ price range, which is about 1/10th of what a legit copy would probably be worth.

Its kind of hard to figure out what is going on with the bidders.  If they think the things are real, they should be bidding them up to much higher prices than that.  If on the other hand they think the things are fake, they shouldn't be bidding at all.  Yet everytime they manage to bid it up to a price that is way too high for a fake and way too cheap for a real one.  What do these bidders think these cards are?

In my case when I bid I thought it was real and I put in a higher bid than what I ended up winning it for with that expectation in mind.  Other bidders pushed it up to about the 25$ level, then jumped ship.  Perhaps there are shill bidders, but looking at the one I linked to above it got bids from 4 separate bidders, two of whom have a ton of feedback and are likely legit bidders, and two of whom have less than 100 feedback and might be shill bidders.  It was won by one of the two with high feedback, and one of the two with low feedback placed the second highest bid, consistent with what you would expect if shill bidding was going on.  But at the same time the other "real" bidder came close to winning it and the "shill" bid only bumped it up a couple hundred Yen.  So even if the two suspect accounts hadn't bid, the card would have sold for almost the same price and therefore shill bidding alone can't account for this irrational pricing.

So I kind of wonder if these real bidders are just suckers like me being taken in?  You'd think they would have caught on by now though, this guy has been at it for years now (though he does have near perfect feedback).  On the other hand, maybe they know and don't care - perhaps they are planning to flip these fakes themselves?

I don't know exactly what is going on but it sure does stink anyway you look at it.