Two of these things are not like the others 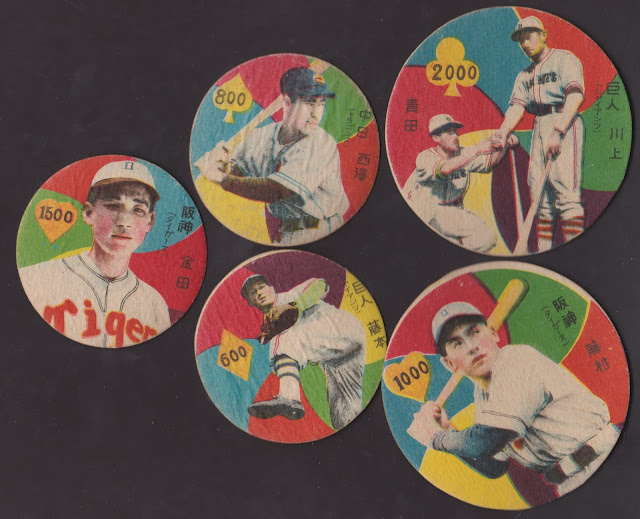 The 1948 JCM 26 "Pinwheel" menko set is a bit of an odd and well known one.  It consists of just 6 cards and as you can tell from the above photo I am one short of the set (Noboru Aota, where are you?)

You'll note that there are two sizes, half the set are fairly big (3.5 inches diameter, the one I'm missing is also that size) compared to the other three. This is not uncommon with menko sets from the late 40s and 50s which sometimes came in sets of different sizes.

But the main distinction between the larger and smaller cards isn't their size but rather their rarity.  The smaller ones are quite easy to find, and I got all three of them a while ago.  According to Engel someone found a large lot of them in mint condition a few years back.  This is very easy to believe since they (along with cards from JRM 19 and 20, which were apparently found in the same horde) are constantly popping up on Yahoo Auctions with low prices on them.  They are among the very few vintage menko out there where if you want them, you can easily find them available for sale at any given time.

The big ones though weren't included in that find and they are actually quite scarce (Engel rates them R2 which seems about right).  I'd been wanting to find them for a while and pounced when this lot came up for auction a few weeks back.  It was entirely the two big ones I was bidding on (featuring Noboru Aota/Tetsuharu Kawakami and Fumio Fujimura), the other three were basically just bonus add ons.

I do like these ones since the colorful pinwheel background is just perfect.

One more of the big ones and I'll have this set complete!
Posted by Sean at 7:43 PM