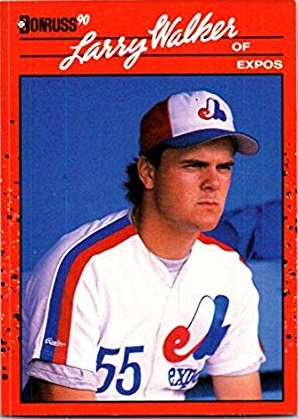 This is a slight detour from the usual Japanese baseball focus of the blog, but as a Canadian I felt I would be remiss if I didn't take this opportunity to acknowledge the induction of a fellow Canadian to Cooperstown!

I'm super psyched about this.  Back in the early 90s when he was playing in Montreal we used to take a lot of family trips there to visit my grandma and during those my dad would take us to a few games at the Big O each summer.  Tim Raines left the team after the 1990 season and Walker and other rookies that year like Marquis Grissom and Delino Deshields quickly filled his shoes as the team's stars.

Walker was extremely popular as one of the only Canadian stars to ever actually play in Montreal and I remember, working at the family card store at the time, anything Walker related would just sell itself, everyone was collecting his cards.  The Blue Jays were the more popular Canadian team in the early 1990s since they were way more competitive and building the team that would win back to back World Series.  But they didn't have a Canadian star like Walker, and such was his impact that his presence alone allowed the Expos to at least  compete with the World Series champs in the Canadian popularity contest.

Of course, the end of Walker's tenure with Montreal came  as part of the team's post-strike implosion, and he went on to have his most dominant seasons with the Rockies, but I prefer to remember the 1990-1993 Larry Walker. The guy who only became one of baseball's all time greats because he wasn't a good enough hockey player to make the NHL - such a Canadian origin story!

The beginning of his career with the Expos also coincided with the only other Canadian - Fergie Jenkins - being inducted to the Hall of Fame in 1991, and my dad also took 14 year old me, and the whole family,down to Cooperstown to see him inducted.  Hard to believe that was almost 30 years ago now and we're finally seeing Canadian guy #2 inducted.  Wish I could be there!

Oh and I think some other guy also got in, but who cares about him.
Posted by Sean at 6:33 PM