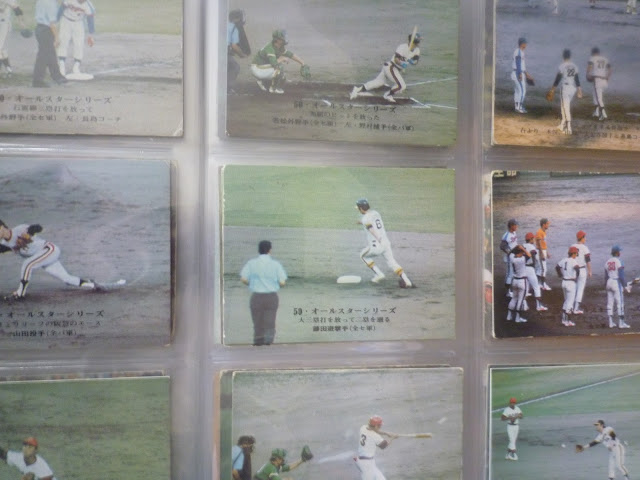 As I've detailed in earlier posts, I'm working really hard on the 1975-76-77 Calbee "Monster" set of 1472 cards.  I've added quite a few cards to it over the past year and I'm about 75% of the way to completing it - I now have more than 1,000 of them!  I even have made decent headway on the rare (and expensive) regional issues and am about halfway to completing those series.

But I've entered a new phase in my pursuit recently which has caused the pace at which I cross these cards off my checklist to drop significantly.  Basically the collection has had two phases which preceded this one:

Phase 1: just randomly amass as many cards as possible, buying them in lots whenever I could find them and not worrying about getting doubles since there were so many cards that I needed any lot I bought was bound to have a lot I didn't yet have.  Since the lots I could find were small and rarely exceeded about 50 cards at most (less than 5% of the set total), this was feasible for a long time.  This lasted about 5 years and got me past the halfway mark.

Phase 2: Stop buying the cards randomly in lots because once you pass a certain threshold the lots start producing too many doubles and it no longer makes sense as a collecting strategy.  Switch to buying the cards you need one by one.  This strategy lasted a little over a year and got me to where I am now.

Now I'm at a difficult point because I realize how few of these cards are in circulation and how small the number of dealers there are out there who actively deal in them.  I've basically stripped every dealer who has a stock of these of the cards I need, so now when I go through each dealer's list I only find cards I already have (and its getting frustrating).  So phase 2 has more or less run its course and I'm still several hundred cards short of completing the sucker.

Phase 3 is where things get tough.  I now have to wait for "new finds" of the cards I need to spring up, which is a real long game to play.  Some of the cards I still need probably aren't all that rare but rather its just coincidence that nobody happens to have any at this point and as they break up collections or whatever they do to put cards up I'll probably find them one by one for reasonable prices.

Some of the others are from the rare regional issues, which I know I'll have to pay real money for and am fine with picking those up over a long time period as it helps balance the monthly card collecting budget better that way.  I suspect though that there are also some "hidden" rarities lurking out there.  I've noticed with other vintage Calbee sets that there are a lot of cards which the guides (Engel and SCM) don't put a high price on and aren't part of any known regional limited series but they get bid into the stratosphere whenever they show up nonetheless.  I've unexpectedly lost a couple of bids on 1975-76 cards that the guides tell me aren't rare, yet they sold for several times more than what they are listed for.  Card #948 of Tanizawa Kenichi for example lists as a common that I thought I would pick up for 200-300 Yen in an auction a few weeks ago, but it ended up selling for 10 times that much (2280 Yen) much to my chagrin!  I'll try to record the existence of these as I find them for information's sake. Its obvious to me that I am not the only person in Japan working on this set, and other collectors (who are my competition) seem to be aware of which cards are rare and which aren't, despite what the guides say.  Despite all I have learned about this set over the years, there is still much that I do not know.

Anyway, I thought it was interesting to note that I've hit "the wall" at about 75% of the way to completing the Monster.  That percentage probably varies quite a bit from set to set.  With junk wax era cards, there is no "wall", you just buy the set for five bucks.  With US sets from the 60s and 70s too the "wall" probably only exists as a financial constraint.  Even the harder short printed series in most of those sets are available for sale on Ebay at any given time, and difficulty in buying them may be more related to waiting for one to come along at the "right price" rather than waiting for one to come along at all.

Hitting the wall where I have is probably not only the result of limited supply, but also of the limited circle of dealers who sell vintage Calbee cards.  There are about half a dozen guys selling on Yahoo Auctions that I deal with regularly to get cards from the set and that is about it, anything else is just somebody who specializes in other stuff but happens to lay their hands on a few old baseball cards. The brick and mortar card shops, at least here in Nagoya, don't really have anything at all and specialize in modern stuff.

Anybody else hit a wall in their attempts to put together a full set of something?
Posted by Sean at 11:20 PM