Yoshio Tanaka has an Odd Story 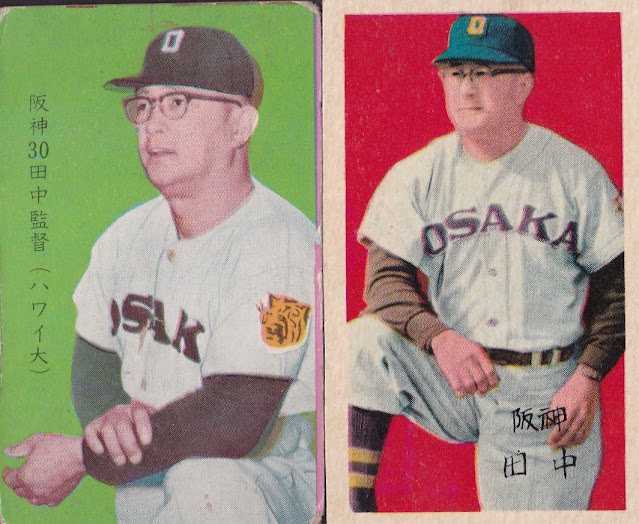 I picked up a couple of cards of Yoshio Tanaka (from the 1958 JCM 54 set and  the1959 Yamakatsu set JCM 33g ).  Tanaka is an interesting figure in Japanese baseball history who I was surprised to find doesn't even have so much as an English language Wikipedia entry.  Which is odd because his story seems kind of really out there.  If you'll oblige me, I'd like to lay out the basics of what I've been able to glean about it from the Japanese internet here.

Then one day fellow Hawaiian and future Hall of Famer Tadashi Wakabayashi, who went to McKinley High School with Tanaka and had gone off to Japan to join the newly formed Tigers team in 1936, invited him to join  the team.

According to his Japanese Wikipedia page there seems to be a bit of debate about what drove Tanaka to quit teaching and accept that invitation.  One  version of the story is that due to the deteriorating relationship between Japan and the US at the time Tanaka would have had to renounce his Japanese citizenship (he held dual nationality) in order to continue his teaching career, something his  mother was staunchly opposed to.  So he had to quit teaching to maintain his dual nationality, and playing baseball was just the job that came along.  The other version is that he wanted to marry a girl that his mother did not like at all and he came to Japan mainly so he could be with her, with baseball just being the gig that allowed him to do so.

Either way, he came to Japan and joined the Tigers in 1937 and played with them through 1944.

Talk about an awkward time for an American to be starting a career in Japan!

Here is one thing I can't wrap my head around about his story.  His playing career ended in 1944 partly because the 1945 season was interrupted by the war and partly because he was drafted.  But what I can't figure out is into which country's military?  His Japanese Wikipedia page just says he was drafted into military service, so you'd assume that meant Japan's because he was in Japan at the time.  But this article from Monthly Hanshin Tigers says he was drafted into the American military!

How was that even possible?  I figure this must be a mistake since it makes no sense at all, but still, wouldn't that have been a conversation stopper at the dinner table at the time if it really went down like that? (edited to note: per NPB Guys' comment below, he was definitely not drafted into the US military!)

His playing career wasn't really star calibre, though he was known for his nickname (Kaiser) and the fact that he was the only catcher in NPB until Atsuya Furuta came along decades later to wear glasses.

After the war he worked for the American military in Japan for a few years, before coming back to baseball in 1954 as a coach for the Tigers.

Then in 1958 he achieved his claim to fame: he became the Tigers manager and thus the first foreign manager in Japanese history.    He lasted two years in the role, in both of which the Tigers had winning records but did not make the Japan Series.  He was the manager of the Tigers during their legendary game against the Giants on June 25, 1959 which was the first ever attended by the Emperor (which his team lost).

My two cards above come from his tenure as Tiger skipper.  He coached for a few other teams in the early 1960s and spent the rest of his life in Japan, passing away  in Tokyo in 1985.