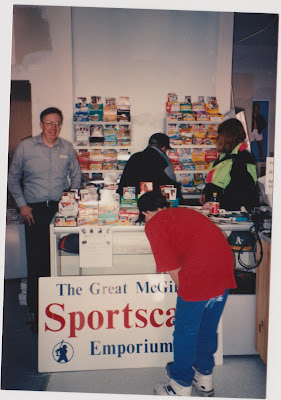 A couple years ago I wrote a post about the baseball card store my dad and I opened back in the early 1990s.  The above photo was from opening day.  My dad is on the left, I'm in the middle behind the counter, and some guy I don't know is in the foreground wearing a red shirt and looking into our showcase.

On the right is my little sister, also looking away from the camera.  This here is a better picture of the two of us, from about 1980. 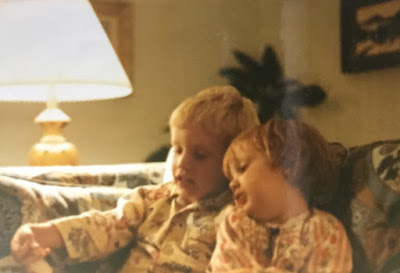 My sister wasn't too big into baseball cards at the same time I was, but she did give it a try.  I remember in 1990  she tried collecting the Fleer set, basically because it was one that I wasn't collecting.  We also went to Expos games together and she would sometimes join me at the dugout trying to get players' autographs.  She lost interest pretty quickly though and switched to collecting basketball cards for a bit but also kind of lost interest in that by the end of the year and never returned to card collecting.

She had other interests and didn't really have a "collector" personality which, if I'm honest, I always admired about her. She loved animals and swimming and hanging out with friends.  Doing actual stuff you know!

We were attached at the hip growing up, my dad being in the army and constantly moving around, so we were the only constant presence in each other's lives.  As adults we kind of moved our separate ways after my parents retired, me ending up in Japan and her in Calgary, but we kept as close as we could, she even spent almost a year living with my wife and I over here in the early 2000s.  After that she went to law school and, having watched her go through the application process while she was staying with us, I decided to give it a try too and ended up following in my own little sister's footsteps.  She was a trailblazer for us both.

Then one day a few years later, around the same time my wife became pregnant with our first child things were about to get really good in life for my little sister.  She had a successful career and was in a loving relationship with a great guy who she was about to start a family with.

And then just when it was all beginning for her my little sister was diagnosed with cancer.

She went through chemo and surgery.  And for a glorious little while we thought she had it beat and would be an inspiring story of a cancer survivor.

Then a few months later it came back.  Aggressive and spreading.  They had no cure.

My son was born, and then so was my daughter.  They loved her and she loved them.  But nobody could do anything.  Just constant streams of exhausting treatment to keep this thing from killing her and buy her a bit more life each time.

She and her husband lived the life they had to the fullest, seeing the world and never feeling sorry, or at least never showing themselves to feel sorry, about the hand they had been dealt.

Then this past weekend, they had some friends over for dinner.  She didn't feel too well, the effects of the cancer spreading to her lungs had become overwhelming in the last few weeks. She went to her room to lie down.  And she never got back up.  She was gone.

I've gotten to know a lot of other bloggers since I started this one, and I've noticed that a lot of us post stories of loss like this on our blogs.  Something about the distraction helps, and a sense that writing can be a useful part of the grieving process.  Also, of course, its a shout out for people to give you some much needed empathy.

I've been posting way more than ever before recently and part of that has I think just been driven by me knowing that this day was coming and me just needing something to do to keep my mind off of that.  Now that it is here....I just miss my sister.

I'll try to get back to posting about cards again sometime, but might be away for a little bit. Or who knows, maybe I'll be back at it tomorrow, its kind of therapeutic.