Some more 1976 Pepsi Round Menko 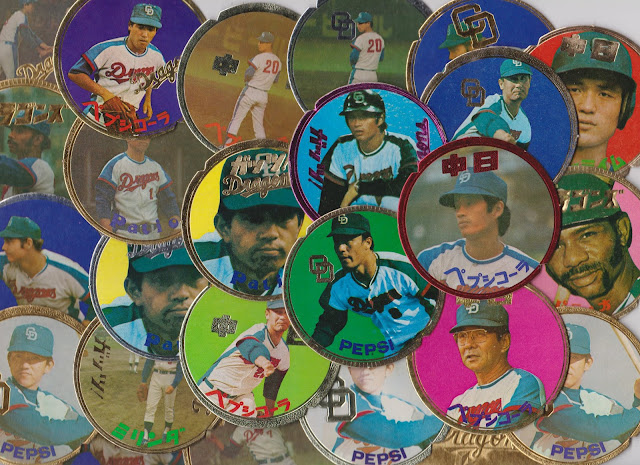 My 1976 Pepsi Round Menko collection took a pretty good step forward the other day with the addition of these babies.

I really do love the mid-70s Pepsi sets since they are quite colorful and just look pretty cool.  The cards are kind of hard to find (Engel rates them R2 on his rarity scale) and, being menko, most of them that still exist are in pretty rough shape (though this lot is in decent condition).

I'm really curious about these cards and how they were distributed back in the 1970s.  Pepsi issued several sets in the mid-1970s that all had one thing in common: the Chunichi Dragons.  For some reason all of their sets seem to have only been issued in Nagoya (home of the Dragons, and me!) since, with the exception of a few Sadaharu Oh cards.

This is kind of weird for a big corporation like Pepsi that does business nationwide.  Nagoya and the surrounding suburbs (the Chubu Metropolitan area) has about 9 million people and is Japan's third largest urban centre, so its not a rural backwater.  But at the same time, back in the 70s and even today it paled in comparison to Japan's two baseball centres in the Kanto (Tokyo) and Kansai (Osaka/Kobe/Kyoto) regions which combined had about 2/3 of all the team in Japan (less today but still considerable).

So its kind of a mystery, why lavish Nagoya baseball fans with these awesome sets but not Tokyo or Osaka, which would have been more logical choices?  My main guess is simple convenience: the Dragons might have been way more willing partners in business and might have sold the rights to produce the cards to Pepsi cheaply (free?) while the more popular Giants and Tigers in Tokyo and Osaka might not have been interested.

Its also probably a by product of the weakness of NPB as an organization back in the 70s (and today) - card makers would negotiate with teams rather than NPB for licenses, which would have made creating a team set like these ones a lot easier and cheaper than making a league wide one (though oddly there aren't a lot of team sets from the 70s, at least relative to other types of sets).

Of course the downside though is that you create a big promotion that is only going to be used in one city, so I'm not sure if this actually spurred sales of Pepsi (and Mirinda and Patio, two other drinks sold by Pepsi which were also in the promotion).

Another thing I remain curious about is how these things were distributed.  I've never seen any sort of ephemera related to them - no packs or boxes or advertising signs or anything.  Which leads me to suspect that they were simply distributed to Nagoya area stores that sold Pepsi and cashiers would hand them out to customers.  But did they give them out on a one bottle/one menko basis?  Or were these prizes that only some bottle purchasers got?

So much we don't know about these, I hope to one day solve some of these riddles but in the meantime I'm satisfied to just add these to my collection!
Posted by Sean at 6:51 PM