1978 Yakult Swallows Victory Cards are Selling Well, if anyone was wondering 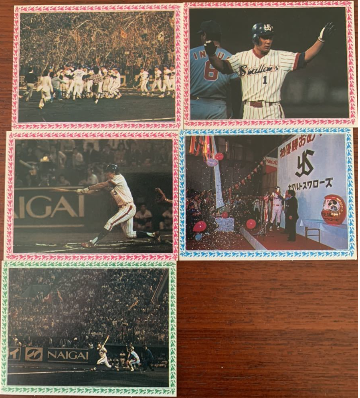 One auction I was watching that just ended was for five cards from the 1978 Calbee Yakult Swallows Victory set.

The cards are easily distinguishable from other Calbee cards thanks to their colorful border designs, one of the few from the 70s that didn't just go with a full bleed photo look.  The Swallows won their first Championship that year, helped along by American slugger Charlie Manuel, and this set seems to have been released shortly thereafter.

I'm not sure if it was only released regionally, but it is definitely one of the hardest to find series of Calbee cards from the 70s out there and prices reflect this.  These five cards went for 82,100 Yen (almost 800$ US), so they are way out of my price range!

I've often wondered about who it is who lays out these huge wads of cash on relatively obscure Calbee cards from the 70s.  There are definitely some old set builders out there like me, but unlike me they have the money to throw around to actually build them (the sets I'm actively working on generally don't have any single card that is going to cost me more than 50-100$ max, otherwise I don't even bother trying to start the set!)
Posted by Sean at 6:54 PM