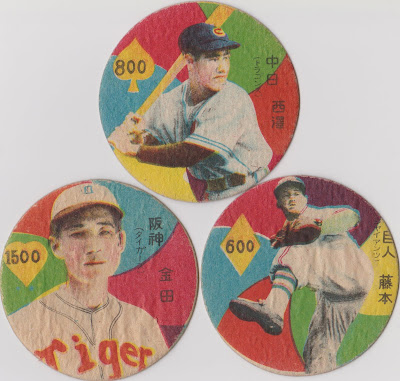 I thought I'd take a break from posts about what I found in my parents' house and return to the normally scheduled Japanese baseball card content of this blog.

In addition to my beloved Calbee and Yamakatsu cards from the 70s and 80s another hobby area I've been exploring lately are post-war menko cards.  They are just so colorful and simple that it is hard not to love them.

These three are from the set catalogued as JRM 26 "Pinwheels" issued in 1948.  Its a pretty good lot in terms of player selection, you've got:

Michio Nishizawa: Kind of an early Japanese version of Shohei Ohtani (or Babe Ruth), he excelled as a pitcher - compiling a 2.23 career ERA, winning 20 games in 1939 and pitching a no hitter in 1942.  Injuries he suffered during the war forced him to give up pitching, but he came back after the war as a position player and became one of the league's best hitters, belting a (then record) 46 home runs in 1950 and winning the batting and RBI titles in 1952. He was elected to the Hall of Fame in 1977.

I'm not entirely certain what game this set was meant to be used to play - the numbers in the playing card suits on each (800, 1500 and 600) are obviously there for a reason but I don't know what it is.  For a set that is over 70 years old this one is one of the easier to find, despite having big name hall of famers the individual cards can be found in the 300-600 Yen each range ($3-$6US) on Yahoo Auctions, even less if you buy them in lots or stumble onto deals.  They look pretty cool too!