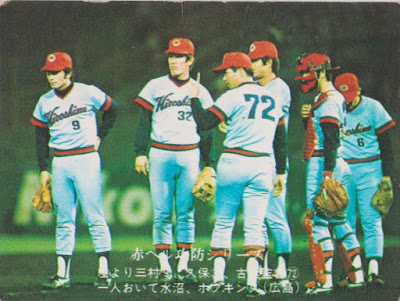 I reached another major milestone with my 1975-76 Calbee set today with the addition of the above card, #636 featuring a gaggle of Hiroshima Carp players and their manager on the mound.

This card is a milestone for me since its the first card from the 赤ヘル攻防シリーズ series which runs from cards 609 to 644 and was only issued in Hiroshima. I'm not sure how to translate the title of the series as it provides the perfect demonstration of why when you read English that has been translated directly from Japanese it often sounds very awkward.  The first part of the title can be cleanly translated as "Red helmets" and the last part as "series", but the middle 攻防 translates into "offence and defence" or maybe "fight and defend" which as you can see can be written with just two characters in Japanese but requires several words in English.  "Red Helmet Fight and Defend Series" doesn't exactly roll off the tongue in English but I guess it will have to do.

I have had some luck in getting cards from the other two regional issues in the set (one from Hiroshima, the other Nagoya), but these ones have been quite a bit more elusive. I have come to the conclusion based on my experience that these are probably in fact the hardest to find of all the cards in the entire set.

This is contrary to what my copy of Sports Card Magazine (which is a few years old now) suggests as it lists these as the cheapest of the three regionals (commons at 5,000 Yen each, compared to 7,000 and 8,000 for the other two series).  While all of the regional issues are hard to find, singles from this series seem to pop up about half as often on Yahoo Auctions and get higher prices than from the other two. I paid 2000 Yen for this one, which is the cheapest I've seen a card from this series go for, while I've been able to get cards from the other two (commons at least) in the 1,000 to 1500 Yen range.  The 40th series in the set (cards 1400 and up) are also hard to find despite not being regional issues, but I've been getting singles for them in the 500 to 1000 Yen range so they are a bit cheaper.

Anyway, it looks like cards from this series are likely going to be among the last I find for the set, which is coming along nicely.  I've added a few dozen singles from the easier to find series so far this year and I think I must be at around 1,000 cards out of 1472 so far, though I haven't counted!