Puzzle: Why are Yamakatsu cards always minty while Calbee ones are always destroyed? 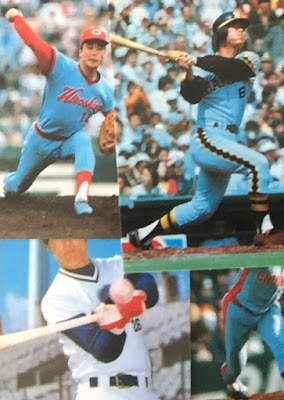 I am currently trying to put together the 1978 Yamakatsu set (along with the 1979 and 1980 ones).  Jay, a member on Net54 who I have a trading relationship with (I send him Japanese cards, he sends me American ones, mostly Expos), kind of got me started on them a couple of years ago when he was putting his set together and asked me to find some.  Looking for cards for him got me into them as well and now I sit here exactly one card short of finishing the set.

If you ever work on that set, the last card you will need to get is of Isao Shibata.  That was the last card Jay needed too and it took him forever to find one.  Now its my white whale, I guess it was short printed as they are quite hard to come by.

The thing I want to talk about in this post though is an odd detail I've noticed as I collect both Yamakatsu and Calbee cards from the late 70s.  When buying Calbee cards from that era the vast majority of the ones you find are in low to mid grade condition.  They are almost all "well loved", with rounded corners, creases and sometimes even kid's names written on them.  I'm not a condition sensitive collector so this doesn't bother me much, all my pre-1990s Calbee sets probably average between vg and ex on the condition scale.  If you were the PSA registered set builder type though you'd probably go mad trying to put together a vintage Calbee set - even the ones with sharp corners usually have some discoloration on the back (the result of existing in an extremely humid country!)  The surviving cards are probably similar in condition to the population of surviving American cards of the 1950s.

Yamakatsu cards on the other hand are the exact opposite.  Almost all of my Yamakatsu cards are in the ex-mt to near mint or even mint range.  This isn't because I've been picky about buying them, its just because almost all of the Yamakatsu cards I've come across are still in pretty pristine condition compared to the Calbee cards I've found.  Without risk of exaggeration I think I could describe my 1978 Yamakatsu set (minus 1 card) as being in near mint condition, with nothing below exmt.

I find this to be kind of mystery.  My Yamakatsu and Calbee cards come from the same era and depict the same subject matter, yet they were obviously not collected by the same people back in the day.  Calbee cards got a lot of love back then from kids, while Yamakatsu cards seem to have been treated much like adult collectors treat their cards today - in a way that preserves their condition.  Which itself is odd since the modern hobby didn't exist in Japan (and barely existed in the US) back then.

With Calbee cards, it isn't until the late 1990s that you notice an uptic in the number of cards that have been treated with care, and even with more recent cards from the 2000s its not unusual to buy a lot and find that half of them have obviously spent some time in someone's pocket getting their corners rounded.  But even in the 1970s Yamakatsu collectors weren't doing that.

I haven't come up with a convincing theory as to why that is.  Yamakatsu cards were definitely marketed towards kids and not to adult collectors back in the day.  The main difference between them is simply that Calbee cards came with bags of chips while Yamakatsu cards were sold as a stand alone product not attached to anything else.  But that doesn't get us very far in explaining why they have survived so well in comparison to their Calbee contemporaries.  Another thing is that some of the Yamakatsu cards on the market today are probably the remains of "dead stock" packs that nobody bought back in the day and thus they survived well.  Some Calbee card packs also survived that way but probably in much smaller proportions than Yamakatsu ones.  That is probably a partial explanation for why there are a lot of minty Yamakatsu cards around, but it doesn't tell us why there are almost no low grade ones, surely somebody bought some of these cards and played around with them back in the day?  So where are those cards?

Anybody have any clues as to what is going on here?