Hank Aaron: Approaching his Excellency in 1992 (and hating every minute of it) 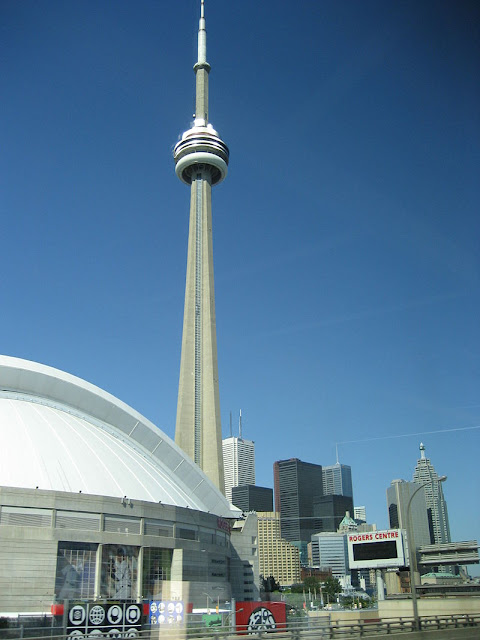 "His excellency Mr. Aaron is holding Court" a page announces, "Let all those who would obtain his signature pay the 25$ levy and form an orderly and silent qeue to the left."

He sits behind sheets of luxurious blue satin, the squire taking his scepter and crown and placing them under the table.  The King's Hand, adorned in the traditional garb of vertically striped collared shirt and green golf slacks, takes his place standing next to the throne. 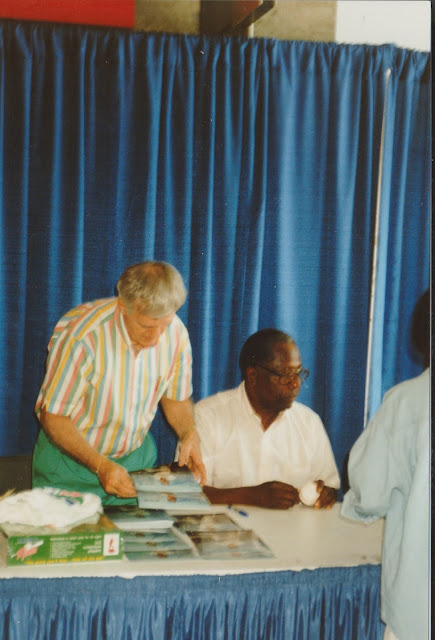 "Those that shall approach His Excellency shall do so in silence" he bellows to the huddled masses clutching various items worthy of signing.  "Eye contact shall not be made, remind thyselves of thy mortality in His presence.  His Excellency shall enter a state of complete meditation for the duration of this session in which he must not EVER be made aware of the presence of any of you.  I need not remind you of the presence of the Praetorian Guard who shall severely deal with those who fail to heed this rule and seek to have any sort of interaction with Him." (Sound of clanging armor reverberates through the Skydome as members of the Guard stand to attention, autograph seekers nervously exchange glances).

"So it is spoken, so let the Signing begin!"  Gong crashes, signaling the beginning of the signing.

The queue begins to move, the seekers approach.  To each a eunuch is assigned to whisper into the ear of the supplicant:

Upon arrival at the head of the queue, the supplicant parts ways with his  eunuch and provides to the squire, adorned in an unbuttoned Braves jersey, the item to be presented to Him. 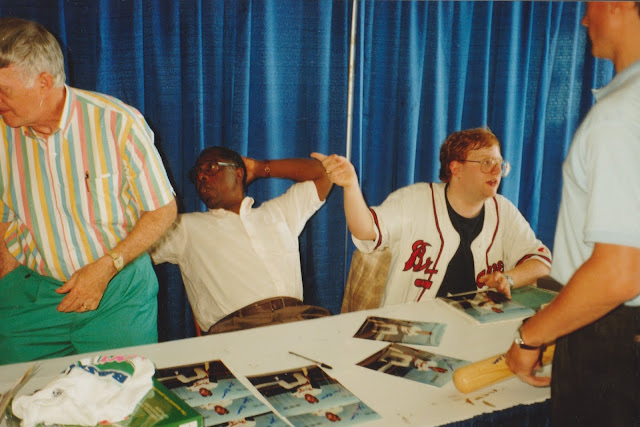 A fifteen year old boy with a baseball thus appears before Him.  The boy dare not speak nor gaze directly upon Him, lest he break the meditation that was so vital for Him to carry out his task.  And He likewise does not look up or in any way acknowledge the existence of the boy before him, as was the way since time immemorial.  Nay, as per custom, he signs the ball that the squire passed to him and places it on the table before him, that it may be removed by some unknown force, while the squire was already handing him the ball of the next supplicant. 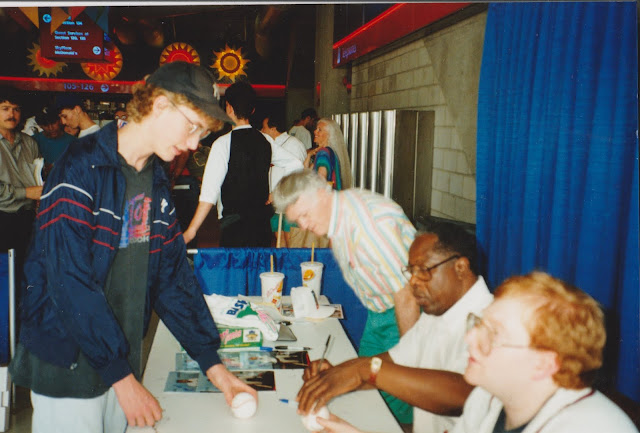 The boy, picking up the ball, retreats posthaste lest he incur the wrath of the King's Hand, who looks on from his McDonald's Big Mac set with suspicion. Once a safe distance away, back with the common people and no longer posing a threat to disturb the aura surrounding Him, the boy looks at the ball and did on reading the signature proclaim:

Among the things I found at my parent's house on my recent trip were these photos that my dad took of me getting Hank Aaron's autograph at a show in Toronto in 1992.  I mainly remember it being an absolutely miserable experience, driving 5 hours to get there, shelling out 25$ that was a massive amount of money for me at the time and then Aaron not even so much as looking up at me when I got to the front of the line to get his autograph.  I couldn't even hand my ball directly to him, everyone had to give it to the guy sitting next to him, who would hand it to Aaron, so as to avoid him having any sort of interaction with any fans whatsoever.  I get the fact that he is a big star and probably gets swamped by fans all the time and wants to avoid that as much as possible, but at the same time I couldn't help but thinking that if he is putting himself out there and charging that much for an in person autograph the least he could do was maybe say hi or do something to acknowledge the person standing in front of him who had travelled for hours for the privilege. 2 seconds of kindness from him would last a lifetime for the person on the receiving end, but nah, its more comfortable and profitable to completely de-personalize the operation so screw that.

Two other points really drove this sense of having been ripped off by Aaron home for me.  One was the fact that Brooks Robinson was also signing at that show, I think he only charged 5 or 10$ per autograph.  My experience with him was the polar opposite of Aaron.  My friend Mike and I got his autograph together and he greeted us with a big smile, shook our hands, chatted a bit and invited us behind the table to get a picture together: 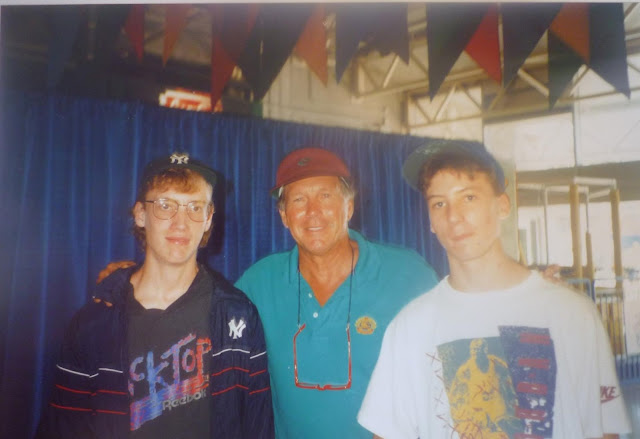 Brooks Robinson has basically been my favorite player from the 60s since that day, Hank Aaron is now way down the list.

The other thing that annoyed Mike and I at the time was looking at Aaron's autograph afterwards and noticing that he wrote his first name in a way that looked like "Stan" instead of Hank or Henry.  It was just a lousy autograph (again, compared to Brooks Robinson's which reads "Brooks Robinson" and is really nice and polished.  Brooks also personalized  mine "To Sean" which was cool).

And 27 years later, to add injury to insult, I fished the Hank Aaron ball out of storage at my parents' place and noticed that he had used a crap pen to sign the ball, so the ink has faded a ton over the years and is now barely legible (despite not having been exposed to sunlight, etc): 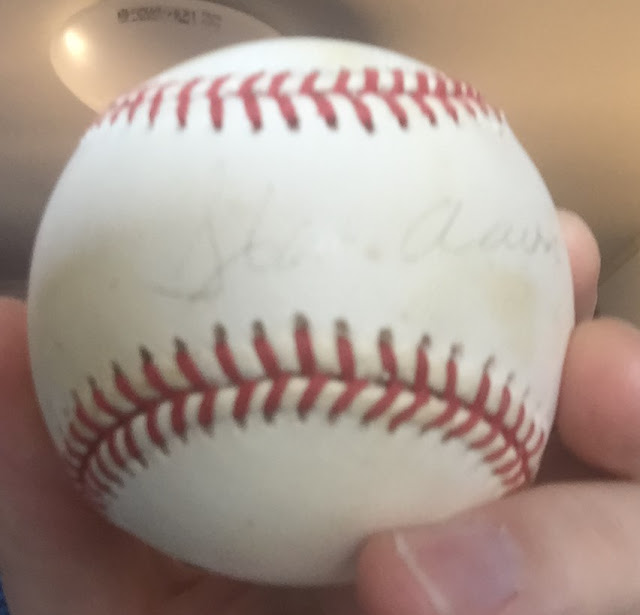 So the moral of the story is, if you are ever in Toronto in 1992, don't bother getting Hank Aaron's autograph.
Posted by Sean at 5:33 PM