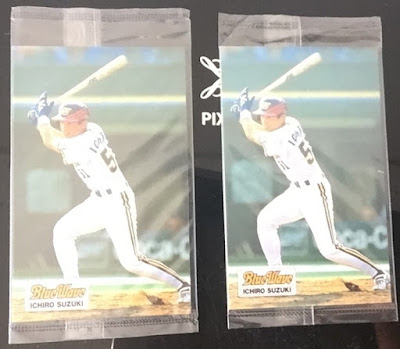 After writing my last post about the fake 1994 Calbee Hokkaido/Kyushu/Sanyo Ichiros I flipped through my pile of "vintage" Calbee Ichiros from the mid-90s.  I had some paranoid thoughts running through my head about whether they might be fake too, though I've never heard of any of his other Calbees being counterfeited.

In that frame of mind I had a bit of a collector heart attack when I noticed something amiss with my 1995 Calbee Choco Snack Ichiros.  As I mentioned in a post in February, I bought that entire set complete in their original transparent packs.  I love that set. It has two Ichiro cards, numbered C-4 and C-32.

As I also mentioned in that post, purchasing the entire set gave me a double of one card, one of the Ichiros which I had purchased individually about a year ago (highlighted in this post here).

I put the Ichiros I have doubles of in the above photo.  Exactly the same, right?  But this is what the backs of those two cards look like: 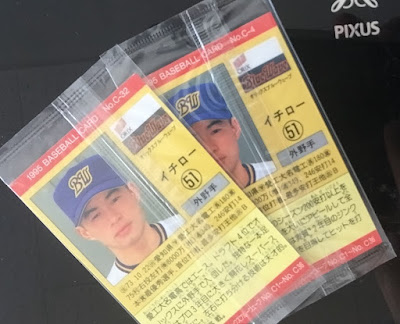 Somebody in this picture doesn't belong here!!!  The one on the left (which is the one I purchased as a single last year) is number C-32, while the one on the right (that came with the set) is number C-4!  But they are the same card on the front.

The one on the left is the odd man out here, C-32 has a different picture.  This is what it looks like here, the card on the right, which is a totally different picture (these are the two Ichiros I got in the complete set): 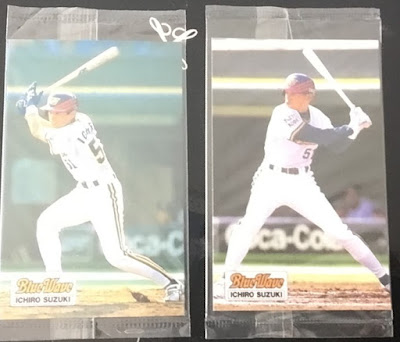 At first I thought this might be an extraordinarily unlikely wrong back, but the likelihood of a wrong back which coincidentally had the same player on it was way too low to be realistic.  I also considered the possibility that it might be a fake, but also discounted that: if someone was going to go to the trouble of making a perfect fake that looks identical to the real one and even somehow get it into an identical sealed pack, they'd probably not have made such an obvious mistake as putting the wrong back on the card!  Also this is the black letter version which isn't really valuable enough to make it worth a counterfeiter's while like the 94 Calbees are.

Finally after frantically scouring the internet I hit upon what seems to be the correct explanation for the discrepancy.  According to the Collecitng Ichiro website, there was a Chiba Lotte Marines Stadium promotional giveaway in 1995 in which a specially made Ichiro card featuring the front design and photo of C-4 from the regular set, and the back design (and number) of C-32 on the back was used.

So the card that I bought as a single last year would seem to have been from that promotion and not from the regular set, even though except for the switched photo it looks exactly like a regular 1995 Calbee Choco Snack card.

Looking around the Japanese internet and auction listings the variation seems to be a lot harder to find than the regular card, which I guess makes sense.  Kind of a neat find, I had no idea this existed even though I've owned one for a year now, it can be fun to discover random things in your collection like this you never knew existed.

(Also, excuse the lousy photo quality.  My scanner (which ironically I placed these on top of to photograph) no longer works and I lost my camera during my trip to Canada last month so for the time being all my pics are with a semi-functional old iPad that I have!)
Posted by Sean at 7:53 PM