Nippon Ham Sausage Set: Where are the Nippon Ham Fighters at? 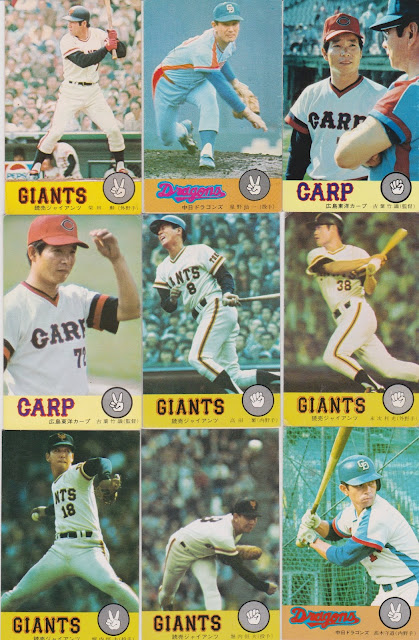 The 1975-76 Nippon Ham Sausage set is one of the hardest vintage Japanese sets to track down singles for out there.  In 5 years of collecting them I only have 11 (the nine pictured above and these two here).  You can read some of the basic information on the set over on Dave's site which has an excellent write up here.  Despite having way fewer cards, this set is probably harder to complete than the much larger monster 1975-76 Calbee set that I am also working on (1472 cards in the latter, 351 in the former).

There is a really odd mystery about this set which is unconnected to its scarcity which I thought I'd use this post to draw everyone's attention to.  Its related to the fact that Nippon Ham, in addition to making this set, also owned (and still owns) an NPB team: the Nippon Ham Fighters.

Now look at the cards I have - no Fighters.  This isn't a coincidence, the set doesn't actually seem to have many Fighters cards in it and the few that do exist are much more expensive than the average cards, suggesting they were short printed (this absolutely beautiful card of Toshizo Sakamoto for example has a starting bid of 20,000 Yen right now for a mid grade copy).

I don't have a checklist of the set handy, but do know that when you scroll through auction listings you will find a lot of cards of Giants players, and a fair number of Carp, Dragons and Tigers players.  Players from other teams, including the Fighters, are way less common.

This is not unique to this set, the Calbee sets from the 1970s are also dominated by Giants players and to lesser extents those other Central league teams which were popular at the time (and now).  But Calbee didn't own its own baseball team, Nippon Ham did!

So my question is why Nippon Ham didn't bother to put more emphasis on its own players in the set.  I don't even mean over-representing them, but simply putting as many Fighters cards as they did Giants or Carp cards.  It makes no sense.  This is especially the case since in Japan the whole purpose of owning a baseball team is to promote the parent company, so logically you would think the same thinking would apply to producing a baseball card set.  But it didn't, at least in this case.

This is made all the more puzzling since Nippon Ham in recent years has rekindled its baseball card sets (in collaboration with BBM) and these sets ONLY feature Fighters players!

This remains one of those minor things that irritate my logical brain when I look at them.  I do love this set, I think its quite beautiful.  But I really want to know why they didn't put many players from their own team in it!  Possible explanations are:

3) Closet Giants fans rearing their ugly heads again.  So many people in the business world are Giants fans that its entirely possible this included the Nippon Ham employees in charge of the set who made the deliberate decision to flood it with Giants players despite the obvious conflict of interest at work.

Not sure if there might be other explanations but any of these seems about equally plausible to me!