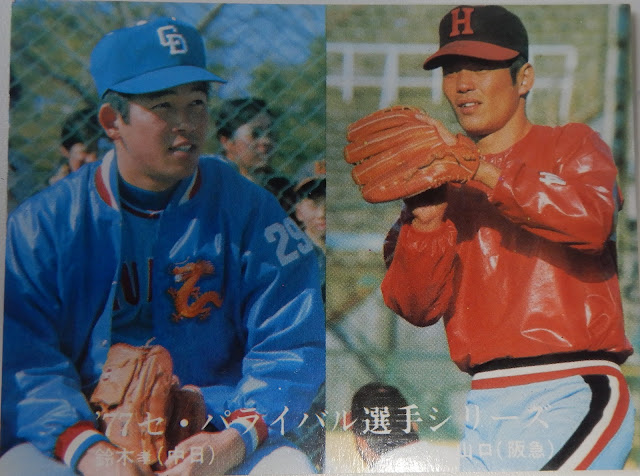 Another week, another new find in my ongoing quest for the 1975-76 Calbee set.

But what about those last 108 cards from #1329 to 1436?  Sports Card Magazine doesn't list them at all.  I'm pretty sure that the reasons for that omission is that some or all of those high numbered cards were issued in 1977 rather than 1976, making this a 3 year rather than a two year set. I picked up three cards from the very highest series (additional tidbit of information: there were 40 series in this set), cards 1402, 1419 and 1431.  These are pretty interesting and carry the title "77 Central Pacific Rival Player Series".  Each card features a player from a Central League team and a Pacific League Team which have some trait that ties them together.   Card 1402 for example features Hisashi Yamada and Koujiro Ikekawa as the representative "Ace" starting pitchers for each league.  In addition to saying "77" on the front, the card backs present the full stats for the 1976 season, so they must be 1977 issues.  The other two I got are "matchup between the new players with the highest expectations" featuring Yasushi Tao and Masao Tamura (1431) and "Pitchers with the fastest pitches" featuring Takamasa Suzuki and Takashi Yamaguchi (1419). 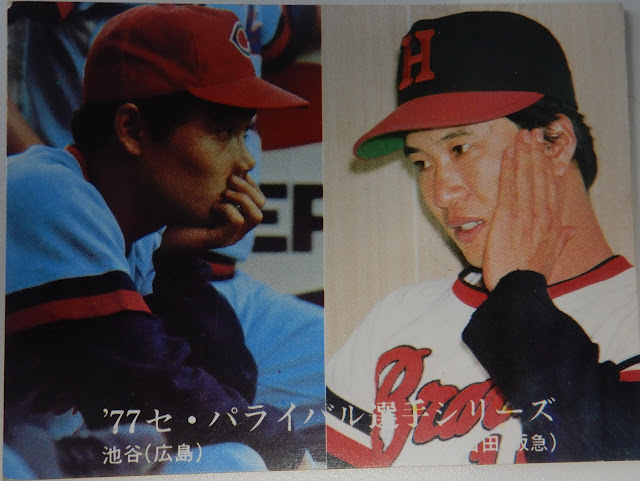 In my overview post I mentioned that the high number series above cards 1328 are rarer and command a premium, but I think this is partially correct.  It seems it is only the 40th series which commands a premium and not the entire run above 1328.  I'm not sure but it seems to start around card #1400 (need to verify this though).  Not all cards in that 40th series feature two players like these, they are broken up between these ones and another simply titled "76 Star players" which feature lone players.

I'm not sure how rare these are compared to the regional Nagoya and Hiroshima issues, but they seem to be close.  A seller auctioned a bunch of them off last week and I put 1000 Yen bids on a bunch, but only won these three (for nearly that amount), which is almost as much as I paid for the regional issues.

Another interesting bit of info I gleaned from these three cards is found at the bottom of the backs of each: 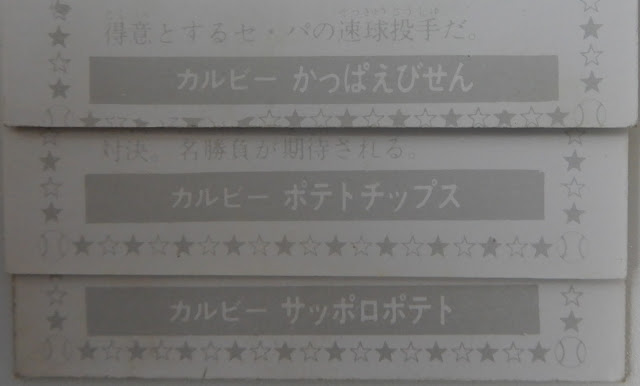 These are the names of three different Calbee snack products.  The top one is Calbee Kappa Ebisen (a kind of shrimp flavored snack), the second is good old Calbee Potato Chips, and the bottom one is Calbee Sapporo Potatos, which I think is another kind of chips.  The lower series cards in this set don't have these printed on them, so its kind of neat to see, I guess Calbee cards in this series at least (possibly earlier ones as well) were sold with different kinds of Calbee snacks unlike these days where you can only get them with (boring) plain potato chips.  I would much prefer for them to be released like this again, I need more variety in my snack life!
Posted by Sean at 10:40 PM