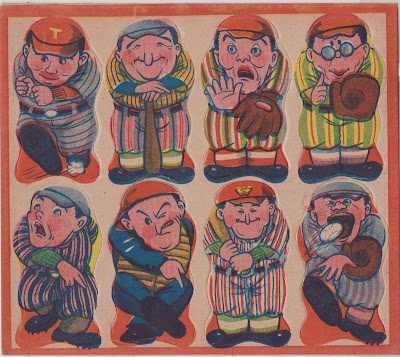 Another cool thing I picked up on Yahoo Auctions recently arrived in the mail yesterday, an uncut sheet of baseball menko!

I love these cards, the caricatures are quite amusing and colorful (very similar to these cards I picked up a few years ago, but not the same set).

Does anybody out there have any info on these?  They depict players from NPB teams rather than college players, they have the team names on the back: 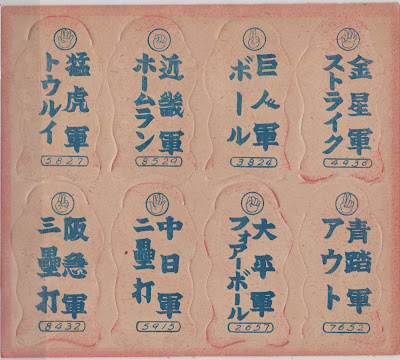 I am tentatively dating this to 1946 since the card on the upper right side is the "Gold Stars" team (Kinboshi), because the Daiei Stars went by that name in the 1946 season only. Also the one in the lower right is using the kanji that were (I think!) briefly used as a nickname for the Nishitetsu Senators (this is a tentative conclusion I am not 100% sure I'm right about this).  The other team names are easier to figure out and square with what they were called in 1946 (and the late 40s in general).

I'm curious about the caricatures on the front, they all have distinctive faces and I am curious if they are modelled after actual players.  They are quite similar to this similar set here which did feature caricatures of players who were identified by name on the back.  This set though doesn't list any names and it doesn't have any of players like Betto who are instantly recognizable so I'm not sure but hope to look into it more.

Anyway, this is a kind of cool find (and I actually got more than one of these as it was a "dead stock" purchase!  So if anyone wants to trade let me know!)