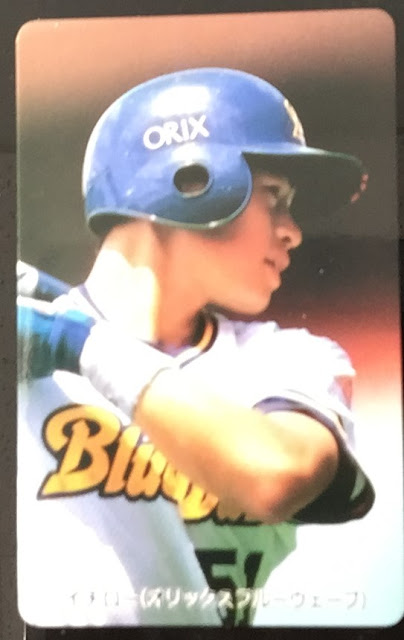 A board member over on Net54 just drew my attention to the latest Prestige Collectibles Auction which has a really useful listing that I think is worth drawing everyone's attention to.  They have a 1994 Calbee Ichiro, card C-37 which is one of three Ichiros in the set, all of which are his first Calbee cards and all of which were regionally issued and are quite rare.

The reason I wanted to draw the listing to everyone's attention is that it includes by far the best explanation of the differences between real and fake 1994 Ichiros that I've seen anywhere on the internet.

Fakes of these three cards are everywhere, I even have one (the one pictured at the top of this post, C-39 from the set).  They are extremely hard to distinguish from legit copies because they are almost perfect, made on the same cardboard and particularly on the front they are identical.  The only way to distinguish them is to look on the backs, the color of ink used by the fakes is not a perfect match and Ichiro's face has a bit of a purplish hue to it on the fakes (and the orange boxes with his biographical details are a bit darker).  Go to the Prestige auction to see what I'm talking about because me just explaining it in words doesn't help much, they have side by side photos that lay it out so its super easy to spot, something which didn't exist on the internet until they put it up (at least as far as I'm aware).

Another intriguing detail mentioned in the auction description was that the grading companies weren't aware of the fakes and graded a bunch of them, meaning that even a PSA holder isn't a guarantee that they are legit.  I was curious how much of a problem that was here in Japan so I looked up the Yahoo Auctions listings since I remembered these are one of the few cards out there that routinely appear in PSA slabs here.  Sure enough, looking through the auctions I couldn't find a single legit one among all the ones which had photos of the backs.  Like this one here, a PSA 10 for 30,000 Yen but which has all the telltale signs of being a fake on it.  And here is an ungraded fake with a starting bid of just 1,000 Yen that will be interesting to see how much it goes for.

The Prestige auction says that 99.9% of the 1994 Ichiros out there are fakes and that it would be virtually impossible for anyone to assemble all three.  I would quibble with both of those assertions - I don't disagree that a majority of the Ichiros out there seem to be fakes but I doubt its 99.9% (just doing the math if we estimate there are just 100 copies of each Ichiro, there would have to be 300,000 fakes to account for 99.9% of the total, and I don't think there are anywhere near that many).  Also while difficult I have no doubt that there are collectors out there who have put together all three of the legit ones (sadly, not including me).  But those are minor points of disagreement as the main point they make is absolutely correct: fakes of these cards are everywhere and its buyer beware.

Actually I might add another minor point of contention.  They and everyone else calls these the "Hokkaido" Calbee set, but it wasn't just issued in Hokkaido, it was also issued in the Kyushu and Sanyo (around Hiroshima) regions as well. Its pretty rare nonetheless!
Posted by Sean at 8:55 PM