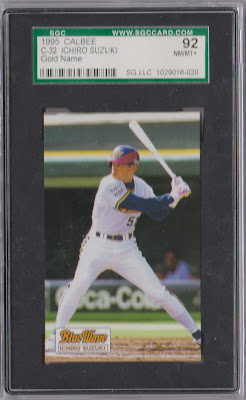 I picked up my first graded Japanese card this week.  Its a 1995 Calbee/ Choco Snack, card C-32 in the set.

I actually picked up this entire set just two months ago so I already have this Ichiro, but not THIS version of it.  This is the harder to find gold parrallel version, which has his name written in gold rather than black letters.  These generally sell for about double what the black letter regular versions of each card go for.

I feel bad for the guy I bought this card from because I got an insane deal.  The cheapest BIN prices or starting auction prices on this card (and the gold version of the other Ichiro from the same set) is 9,000 Yen right now, which is about normal.  This one popped up with a starting bid of just 1700 Yen which I put in and won the card without anyone else bidding. It was an insane bargain.

As I mentioned in an earlier post, graded cards are pretty rare in Japan, the hobby just isn't anywhere near as obsessed with condition as the American one is. All the other copies of this Ichiro card I've seen are raw rather than graded.  I didn't buy this card because it was graded, but rather in spite of the fact that it was graded.  Its cool to see that its in nm/mt+ condition but I could see that from the photos anyway.  Its an almost perfect card - the front is flawless and the only thing that I can see which may have prevented it from getting a "Mint" grade is some microscopic flecks of white on a bit of the edge on the back.

But the cost of having it graded by the seller must have cost almost, or maybe even more than, the amount I paid for it.  It just makes so little sense that I can only imagine the guy is kicking himself for having gone to the expense.

In the US I guess getting cards like this graded is kind of like playing the lottery that you'll get a Gem Mint grade and hit the big bucks.  So you might take the hit on stuff you got with lower grades.  But in Japan I don't think it works like that. It makes no sense that I got this card in this condition - its basically perfect - for this price.  I don't know if Japanese buyers were avoiding it because it was graded and they just don't know what that is or how to value it, or if I just lucked out.  Or is it like the US, where once it is established that a card has an insanely minor flaw and won't get a Gem Mint grade, the bottom falls out of the market for it.  I find the latter really doubtful given the way the market works here.

Anyway, I'm happy with this card in my collection.  I don't think I'll go for the entire gold parallel version of the set because...why would I?  But its cool to have a sample of one and that sample being an Ichiro!