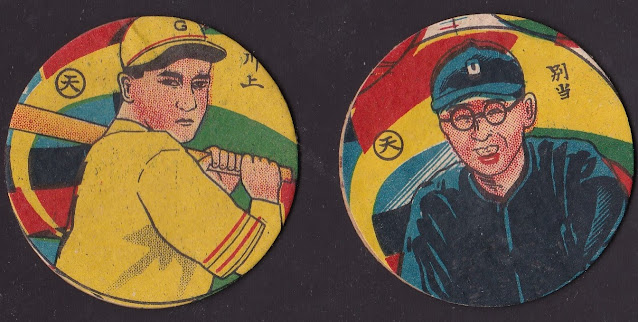 I got these two cards a couple of weeks ago.  They came in the same lot of round menkos as my Takashi Eda card that I posted about last week.
They really jump out at you with those vibrant colors and vivid patterns in the background.  They remind me a bit of 1935 Diamond Stars, at least in the impression they leave.
On the left is Tetsuharu Kawakami and on the right is Kaoru Betto, both pretty big name Hall of Famers from the 40s and 50s.
I've never seen cards from this set before and they don't appear in Engel so I think they count as "new discoveries".
The only identification mark they have is the kanji 天 ("heaven") in a circle.  I'm not sure what the significance of that is (and would appreciate if anyone knows!).  It might be a maker's mark.  There is one card/toy company called Amada which uses that kanji in its name (天田) and these might have been put out by them, though I didn't know they made menko back then.  They put out a set of baseball cards in the 1980s featuring Giants players which Dave did a write up about a few years ago.  They are a bit more well known for non sports cards which they put out in the 80s and I think they were responsible for some Famicom (the Japanese version of the Nintendo Entertainment System) related menko that were released that decade too.
Another possibility is that it isn't a maker's mark, but some sort of game related symbol, though I don't know of any games that use that kanji for that purpose.  The cards don't have the usual paper/rock/scissors symbols or number associated with menko games either, which is a bit odd too.
Anyway, I like these cards a lot :)
Posted by Sean at 7:49 PM