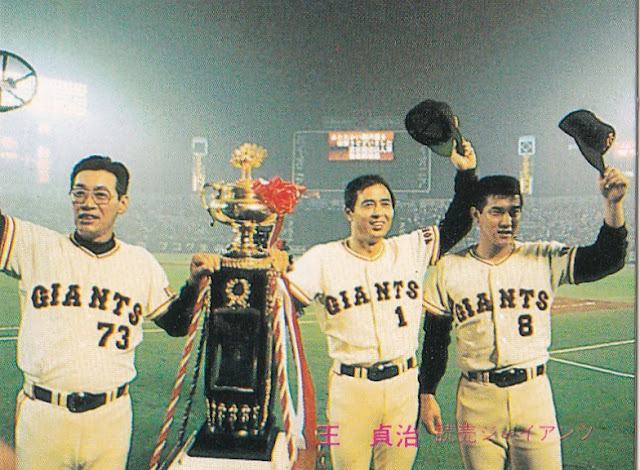 I've been AWOL from the blog for the past few weeks.  October is kind of "hell month" for me at work so its been hard to squeeze time in for blogging.

Despite that, the flow of card purchases by me has continued more or less at its normal pace.  One card I picked up this month was the above, #354 from the 1981 Calbee set.  It is basically Sadaharu Oh's regular card.  His name is the one in pink lettering on the lower right of the photo, and the text on the back just gives some general biographical information about him, unconnected to the photo. 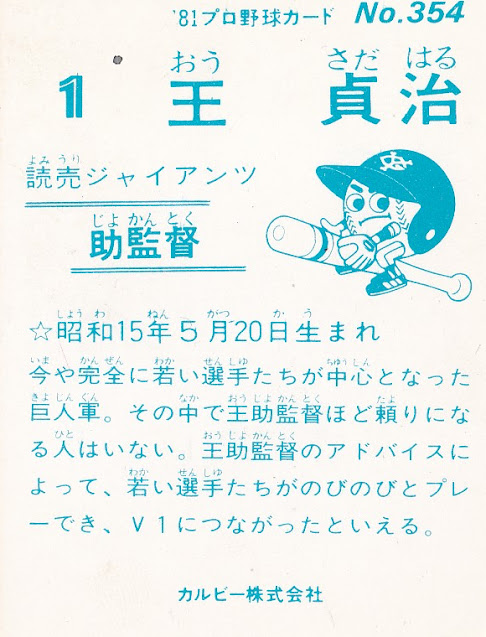 This card is really neat though.  From left to right you have Motoshi Fujita, Sadaharu Oh and Tatsunori Hara.  Those three guys have three big things in common:

1) They were all star players for the Giants;

3) They all ended up in the Hall of Fame.

I'm not sure but I think the photo was probably taken during the 1981 Japan Series, which the Giants won (Fujita was the manager, Oh was assistant manager that year and would take over as regular manager the following season).

A second, and more important, neat thing about it specifically relates to Tatsunori Hara, the guy on the right.  1981 was his first year in pro ball and he was THE hot rookie that year.  He was supposed to be the Giants' next Shigeo Nagashima or Sadaharu Oh. His playing career, which ended in 1995, didn't quite live up to that hype, though he did bang out 382 career home runs and was one of the better players in NPB throughout the 1980s.

The thing is though, Tatsunori Hara doesn't have a card of his own in the 1981 Calbee set.  His first "solo" appearance on a card came in the 1982 Calbee set, which is generally regarded as his rookie (he appears on a few cards in that set, my old Sports Card Magazine designates the first one, card #51, as his true "rookie card").

His cameo appearance on my 1981 Calbee card though seems to be his first appearance in a Calbee set.  Which leads me to the question: what is this card?  I guess its not a "rookie card" since its not his card, its Sadaharu Oh's. But at the same time, Hara is pretty prominently featured on there so its a bit more than just a card of some other player where he coincidentally appears in the background or something, like Ryne Sandberg's cameo on Reggie Smith's 1983 Topps card: 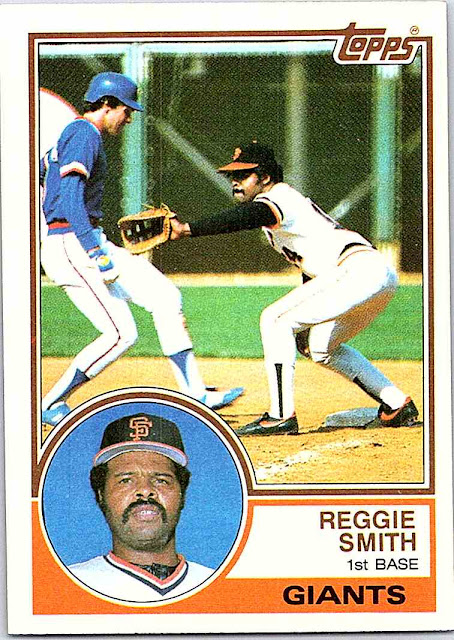 Also, Sandberg of course had a card of his own in the 1983 Topps set, so the question of whether his appearance on the Smith meant something special didn't really come up.

So this card falls into a weird limbo in terms of what the hobby might designate it as since I don't think there is a precedent for this.  Its definitely not a true rookie card, but also definitely not nothing either.  "Pre" rookie card?  No, thats not right.  I can't really decide what to call it.  Anyway, its neat.