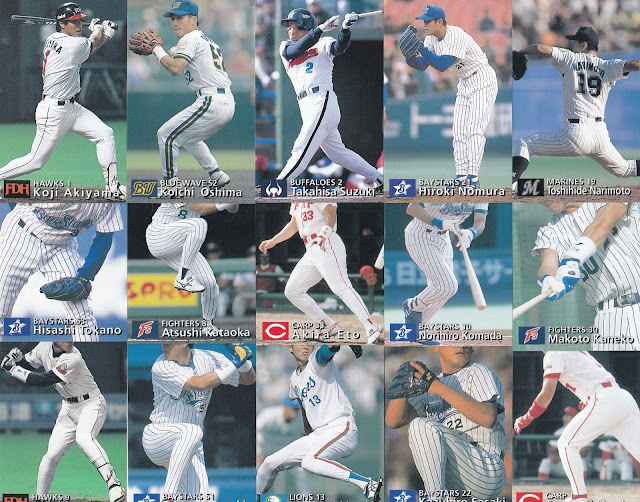 I picked up 15 singles from the 1997 Calbee set this week.  Nobody particularly exciting, the whole  lot only cost me about 4$, but they were all cards I needed for the set.

These get me to 202 out of 237, just 35 to go.  Unfortunately 19 of those are from the rare high number series, but I'm very close to finished with the low numbers.

Thus far my Calbee collection has been mainly focused on cards from the 70s and 80s, as well as the obligatory purchase of contemporary sets as they come out each year. This has left the 90s as the decade with the biggest holes in my collection.  I am pretty close to finished with the 1999 Calbee set, which is by far the easiest to complete.  I also have a decent start on the 1998 set, which is also fairly easy to do.  And the 1995 Choco Snack set I  was lucky enough to pick up as a set a year and a half ago ( in retrospect that was an incredible deal, prices on those have gone up a lot since then and there is no way I could replicate that find today).