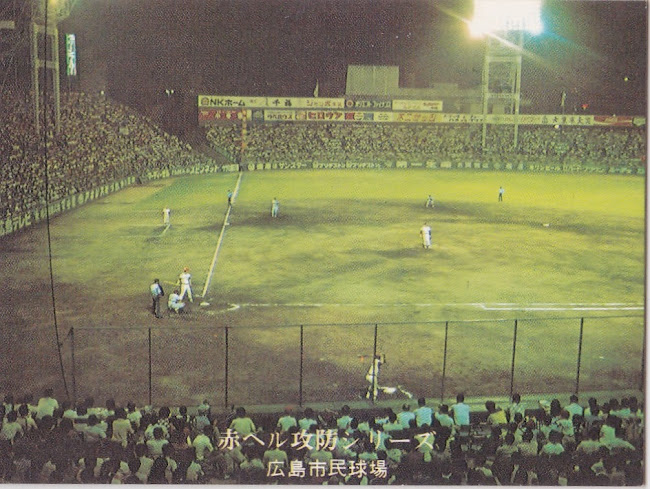 My 1975-76 Calbee set made a massive jump towards completion yesterday with the addition of The Most Valuable Card In The Set (TMVCITS)!

This is card #630 featuring Hiroshima's Municipal Stadium during a night game from the 1976 season.  As I wrote in a post last year about a different card I got (#157 which coincidentally also features Hiroshima's Municipal Stadium)  this is basically the key card in the entire set.  It comes from the extremely rare "Red Helmet" series  which runs from card #609 to 644.  It was only released in limited numbers in the Hiroshima area and is very rare today.  I'm not sure exactly why, but of all the cards in that series, the one featuring the stadium has long been recognized as the most valuable by Japanese collectors.

I have been waiting for one of these to come up at auction for a long time and when this showed up (alongside two other cards from the same series that I need) I pounced.  I ended up winning it for 7500 Yen (about $70 US) which is more than I usually pay for a card (and way more than my 1000 Yen per card limit that I tried to impose on myself earlier this year but have failed miserably at adhering to).  But its the key card in the set, and this basically means that I now know that I won't have to pay more than that for any other card in the set.  The downside of the bidding getting that high was that I had to let the other two cards from the series up in the same auction go, and they sold for about half what this one did. 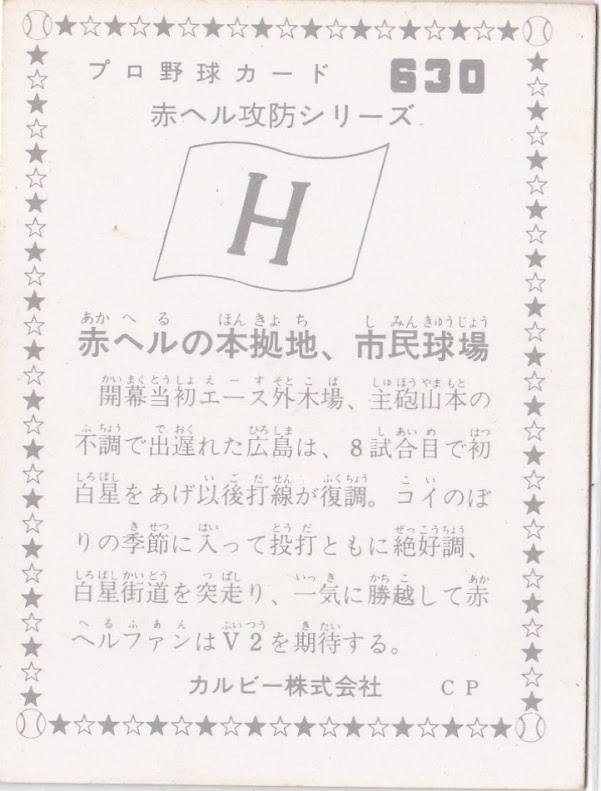 This is actually a really nice copy of the card, probably in ExMt condition or so with a tiny speck of fluff on two of the corners being the only blemish.  And that makes me happy since I had figured for this card I would have to accept a lower grade copy since higher grade ones would be way too hard to find.  But nope, the marquee card in my set is a looker!  Yee haw!

I'm still not close to finishing the whole set, I'm about 400 cards short right now (out of 1472 total), but this is another milestone crossed!