A Checklist for the Yamakatsu Blue Train Set 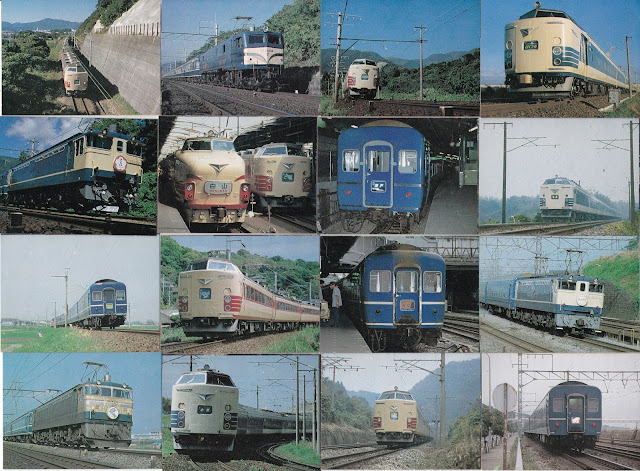 A couple of years ago I picked up an unopened box of Yamakatsu Blue Train Cards from the 1970s. I love trains, especially in Japan where pretty much every trip I've taken for the past 20 years has been by train.

I didn't open that box, but last week I found another one for a good price and decided to crack it open.  There is basically zero information about this set on the internet - no checklist, no year of release no nothing (including stuff in Japanese) so I thought doing so might provide a good opportunity to fill that void.  So this will be my first box-break post. And unlike most box breaks this one will serve the purpose of actually figuring out a bit more about what is in this set.

To begin, this is what the box looks like: 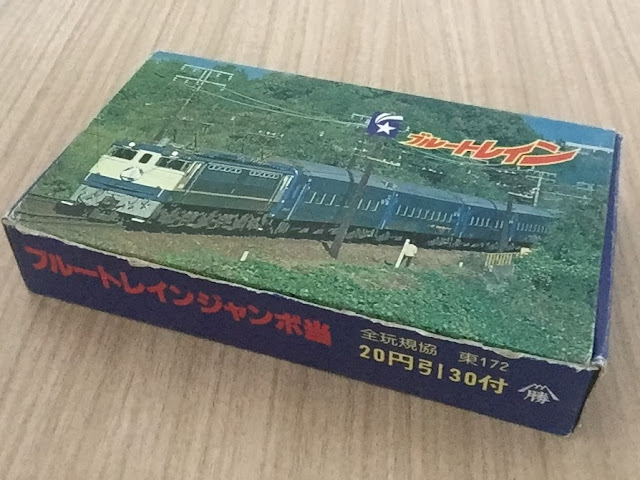 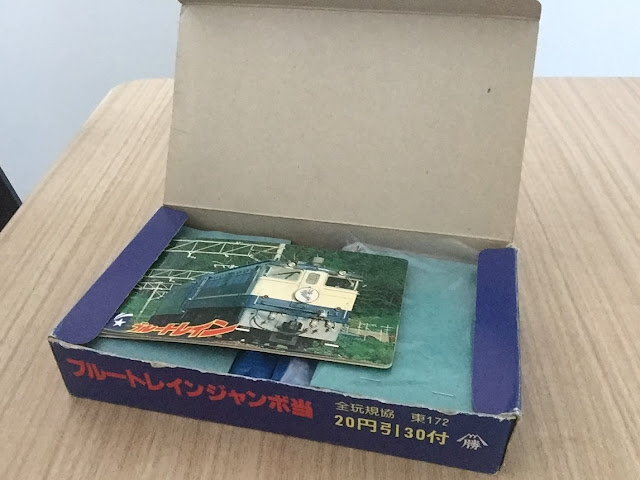 There are 3 prizes that also come with the box.  One is a little album that can hold 14 cards.  The other two are giant erasers shaped like trains.  There are 3 cards randomly inserted in packs which have a little red stamp on the back entitling anyone who pulls them to claim one of these prizes from the store where they bought them. 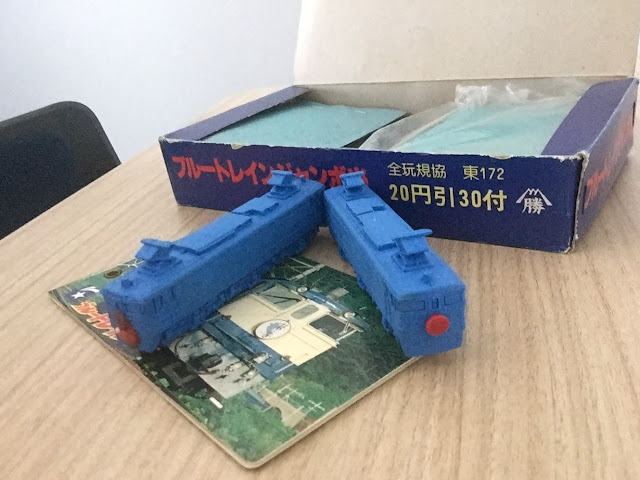 I got 60 cards, consisting of 37 different cards and 23 doubles. Since no checklist exists I have no idea how close this gets me to the set, but at least we now know there are no fewer than 37 cards in the set.

These are the cards I got: 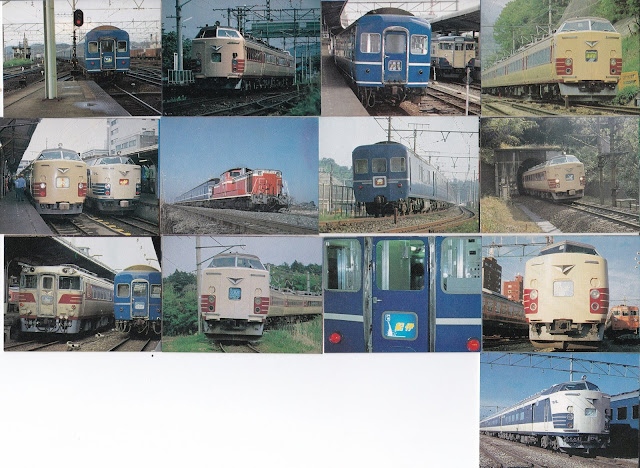 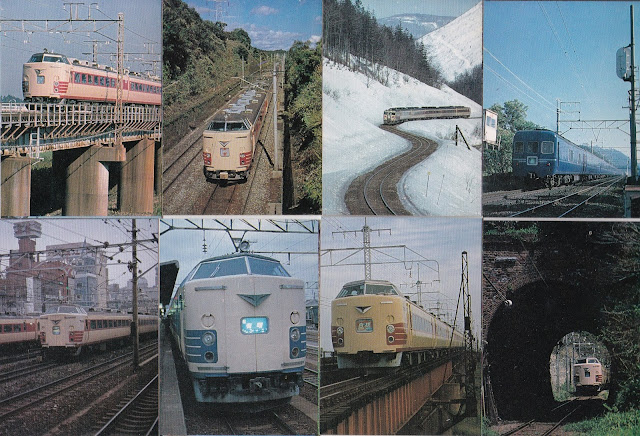 This is what the backs of some of the cards look like (note the one in the lower right, which has the red prize stamp on it): 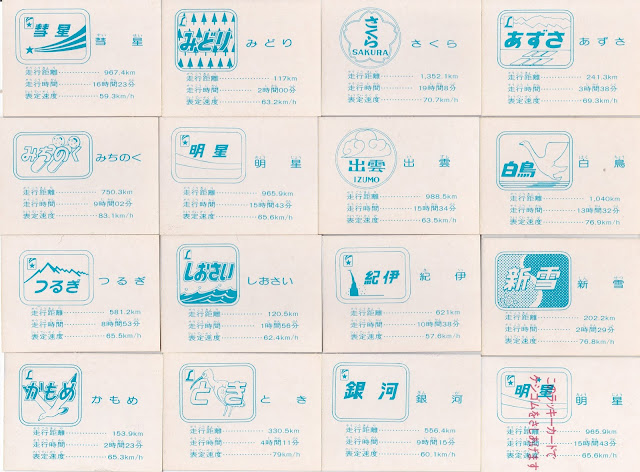 These are not just cards of random passenger trains.  All of them are long distance sleeper trains (called "Blue Trains" since the first one was Blue, but over the years they came in a variety of colors).  These trains have since been replaced by the Shinkansen, the last of them retired in 2015, but in the late 1970s when the Shinkansen network was a lot more limited they were at the peak of their popularity.  Each card depicts a different train which ran a different route and the back features each trains logo (which appears on a plate on the front of the engine).  Some train lines appear on more than one card (three of the ones I got appear on two different cards).  The cards aren't numbered but I think it makes sense to create a checklist based on the train names, so here goes in alphabetical order

I really like these cards, the photography on some of them is really great and makes me want to go on a train trip. 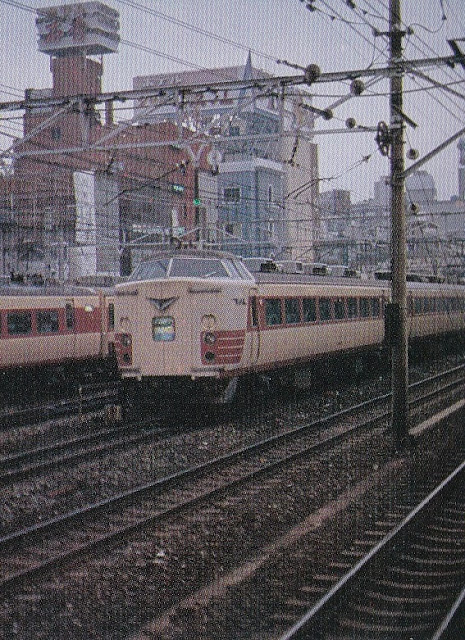 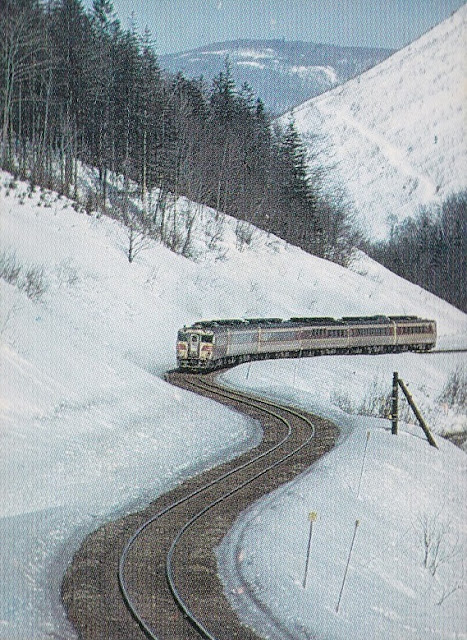 I really wish there were more sets out there like this from that period.  As I said above, these are just long distance sleeper trains, which represent a tiny fraction of the overall variety of passenger trains in Japan.  There were a lot (and still are a lot) of local commuter trains done up in very vibrant colors which would have looked great on cards, but it seems such cards were never produced.

Anyway, there you go internet, your first stab at a checklist for the Yamakatsu Blue Train set.  I might try to pick up another box if I can find one cheap and break it open to see if I get closer to a set.  I'll update this checklist if I do!