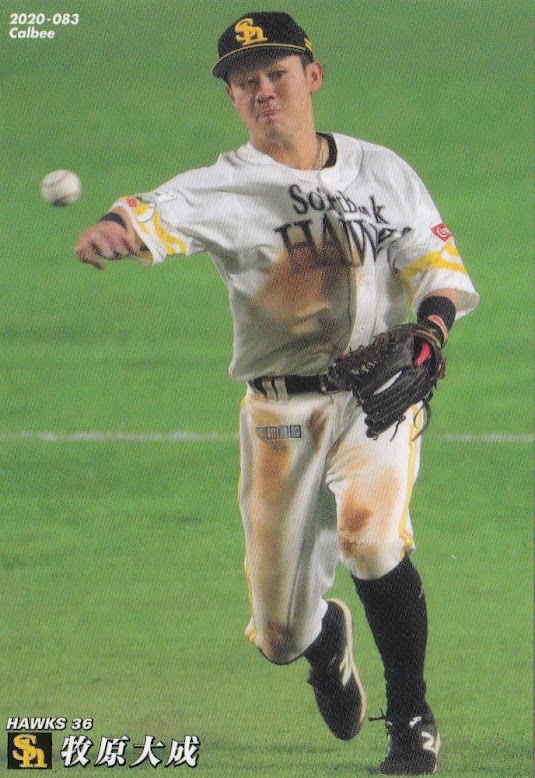 This is Taisei Makino's card from Series 2 of the 2020 Calbee set.  I just picked up the complete base set of 87 cards off of Yahoo Auctions.  Dave did a great write up of the set's details which you can read here so I won't repeat what he's already written there about it.
But I wanted to bring the Makino card to everyone's attention since its the only one (save the manager checklist cards) which deviates from the dreaded Three Rules of Contemporary Calbee Card Photos.  With every other card in the set, including the average leaders subset, every photo features a player either at bat (all position players except catchers), in his catchers gear (catchers) or on the mound (pitchers).
The Makino card is the only one which shows a player doing something else, in this case fielding.
This is a huge step back from Series 1, which featured a much better selection of photographs than usual.  I guess that was just an exception rather than the start of something new.
As I've complained about many times (and since Calbee is still doing it, I'll complain again) none of the photos on their own are bad, but when you've got the whole set in your hands the standardized photography gets extremely boring.
This is made worse by the fact that the photos are almost all taken in the player's home stadium and from the exact same angle.  So for example here are all of the cards featuring Hiroshima Carp pitchers:

You really get nothing in the photos other than the same grass and dirt background because of the stupid angle.  Hiroshima has a really great stadium, I'd like to see more of it on the background of these cards!  Again, none of these cards looks bad on its own, but when you've got the whole set looking at you the monotonous repetition gets really boring.  With Hiroshima at least they are playing outdoors under natural sunlight which make the photos a bit brighter.  The cards of teams that play in domes, like the Nippon Ham Fighters, Yomiuri Giants and Orix Buffaloes look way darker and the players don't really stand out very well.  Its just awful all around.
The only kind of "interesting" thing that I have noticed is that the set contains some of the first cards of the Pandemic.  Years from now collectors will probably be able to tell the 2020 cards (and with the way things are going  I fear maybe also the 2021 cards) by the empty stands in the backgrounds of a lot of cards: 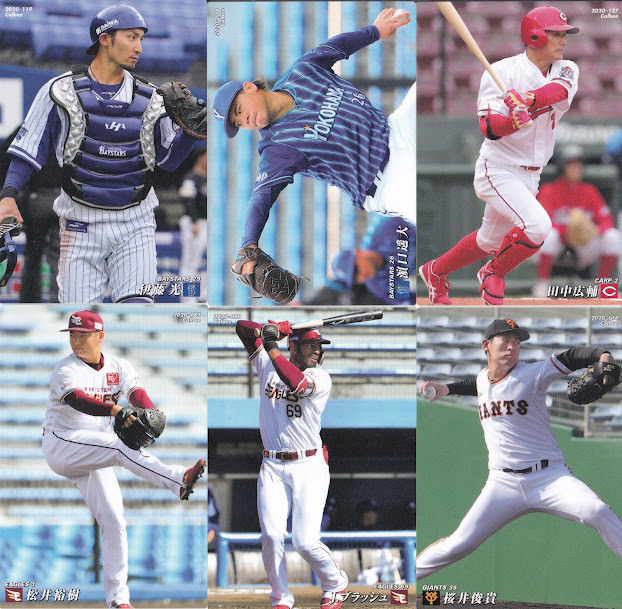 At the same time this of course also contributes to the general misery of looking at this set, so while interesting it isn't helpful!
On the plus side, the whole thing only cost me 900 Yen (about $9) with shipping.  Which is a kind of stupid thing to say I suppose after devoting the whole post to describing how much I dislike this thing.  But yeah, its way better to spend 900 Yen to discover I dislike it than to spend 10-20 times that much on bags of chips which I also don't like trying to put the thing together by hand.  And as a collector its not like I could just NOT buy it, right?  Its what we do after all.
PS: This was my 300th post on this blog!
Posted by Sean at 7:39 PM