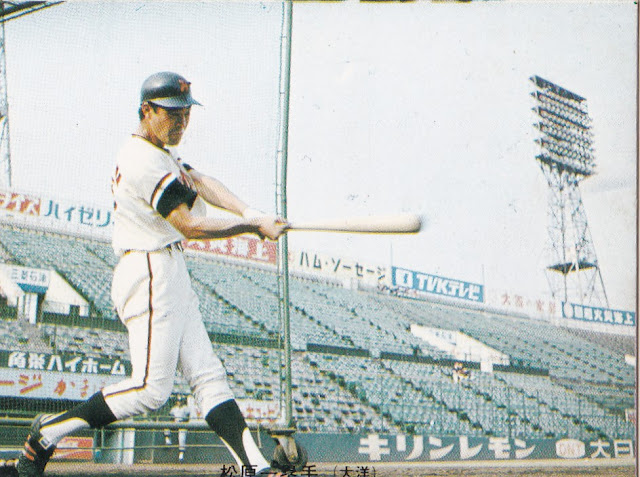 Another card I recently picked up (in the same transaction that got me the cards in my previous post) is this one featuring Taiyo Whales star Makoto Matsubara from the 1973 Calbee set.

Matsubara was a long time star for the Whales (predecessor to today's Baystars), playing nineteen seasons with them between 1962 and 1980 before a swan song with the Giants in 1981.

He was an eleven time all star and led the league in hits twice (1974 and 1978).  He could hit for both average and power, ending his career in both the 2,000 hit club and the 300 home run club.  For reasons that I do not understand at all, despite his impressive career resume he still isn't in the Hall of Fame (though his 2,000 hits did earn him membership in the Meikyukai). 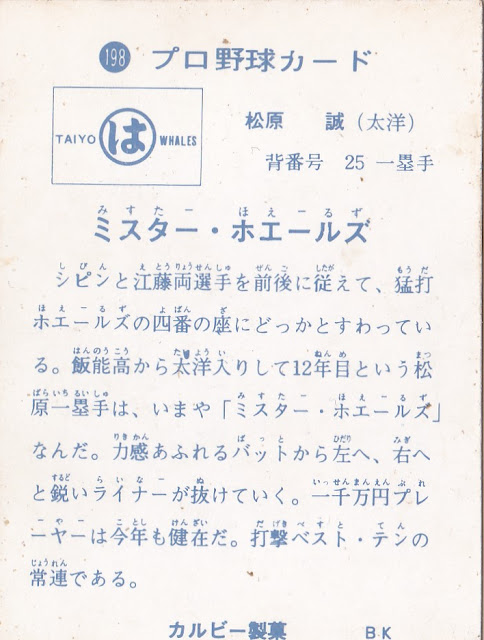 The title on the back of this card (198 in the set) refers to him as "Mister Whales", and the text describes in general terms why he is so known (in short: he is a good player, he is a male, and he plays for the Whales).  It also notes that he is a 10 million Yen player, which would likely have made him one of the better paid players in NPB at that time.

I like this card a lot.  I believe the picture came from Kawasaki Stadium, which was home to the Whales back in the 70s.  It was torn down in 1998 and a soccer field now occupies the property.  I love the way he is framed in the photo with the stands adorned with 1970s advertisements all over them in the background.
Posted by Sean at 7:41 PM