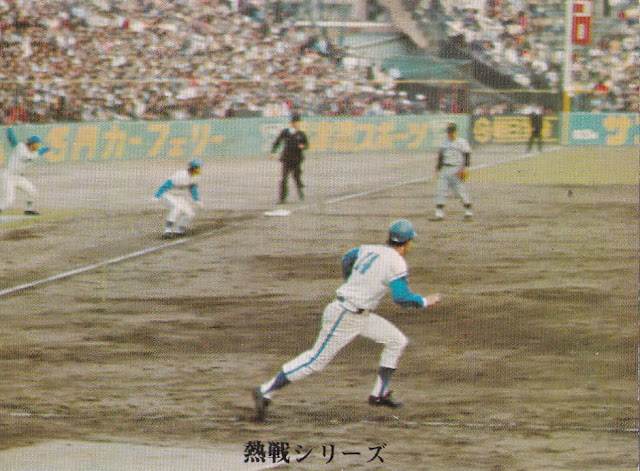 There is a really neat series of cards from the 1973 Calbee set that I've long been fascinated by.  Its from the "Nessen" (fierce fight or maybe "tight game") series and it depicts scenes from a game played on October 20, 1973 between the Chunichi Dragons and the Hanshin Tigers.  I'm not sure how big that series is but it comes towards the end of the set in cards numbered in the 300s.  The cards depicting that game in particular seem to run from 328 to 335.

They fortunately aren't from the hyper rare thousand dollar a pop short printed series, but these cards are still pretty hard to find and usually run about 20$ each when they show up.  I was able to win two of them - card 330 and 332 - in an auction the other day for about 8$ each which was a really good deal. 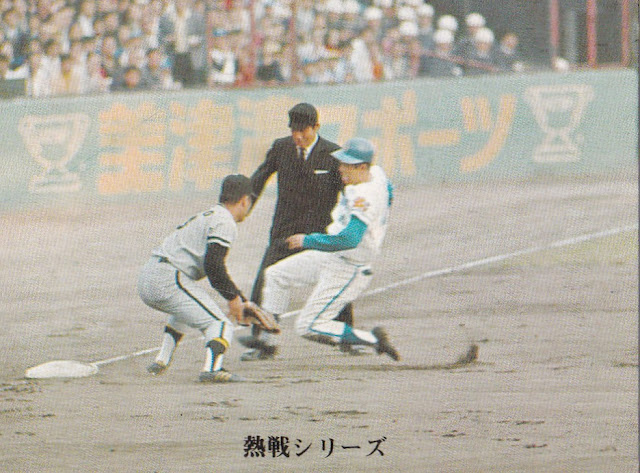 Card 332, pictured at the top of this post, features Dragons star Kenichi Yazawa in the foreground. With runners on second and third, he has just connected off of Tigers pitcher Yutaka Enatsu for a base hit to right field which drove both runners in and put the Tigers in the lead (in the 3rd inning).

The other card (330) pictured below also shows Yazawa, only this time in the first inning.  He was a runner on first base when Jimmy Williams got a base hit to center field.  Yazawa tried to make third on the play and as you can see, he didn't quite beat the tag!

The Dragons nonetheless went on to win the game 4-2.

I love the way these cards let you follow the play by play action.  The card sandwiched between these two (331) I unfortunately don't have, but I looked it up and found that it features Tigers pitcher Yutaka Enatsu  conferring with catcher Koichiro Tabuchi after getting Yazawa out at third. 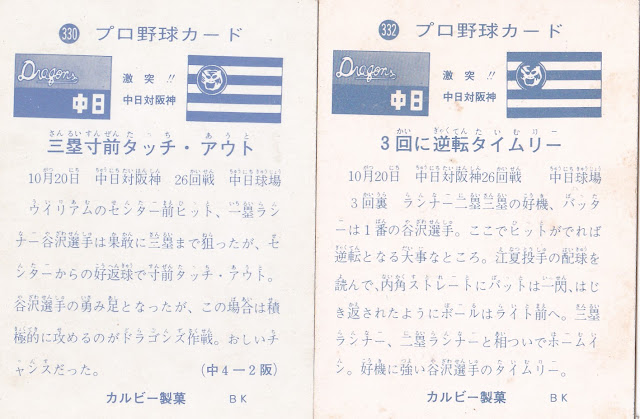 I really want to get the rest of the cards from this specific 8 card run, its very neat to be able to follow a game in progress on baseball cards, another way in which these 1970s Calbee sets were light years ahead of their time.  This would have been a very important game too, the Dragons, Tigers and Giants were caught in a very fierce pennant race and this was (I think) the last game between the Tigers and Dragons.  In the end the Giants won the pennant with a razor thin 0.5 game lead over the Tigers and 1.5 game lead over the Dragons!
Posted by Sean at 6:46 PM